Map of the Sky by Felix Palma

A love story serves as backdrop for The Map of the Sky when New York socialite Emma Harlow agrees to marry millionaire Montgomery Gilmore, but only if he accepts her audacious challenge: to reproduce the extraterrestrial invasion featured in Wells’s War of the Worlds. What follows are three brilliantly interconnected plots to create a breathtaking tale of time travel and mystery, replete with cameos by a young Edgar Allan Poe, and Captain Shackleton and Charles Winslow from The Map of Time. 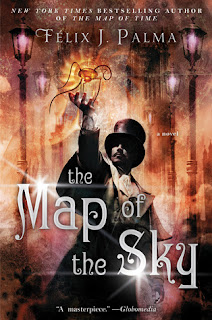 I had the pleasure of reading Palma's book The Map of Time last year so I was excited to get my hands on his new release, The Map of the Sky. Palma has a distinct writing voice, one filled with deception, grace and melodic prose.

The Map of the Sky is told in three parts.   H.G. Wells is perturbed about a sequel to his best-selling novel, The War of the Worlds.  He didn't write it and he wants to meet the author.  But the author shows Wells something that he has only imagined - an alien that was found earlier on an Antarctica expedition, one which Edgar Allen Poe was on.

Emma Harlow is consistently turning away male attention, until one such gentleman won't take no for an answer.  His name is Montgomery Gilmore.  He's wealthy and it's a good thing, because Emma issues him a challenge.  Recreate the alien invasion from Well's book The War of the Worlds and she'll consider his proposal.  Not to turn away from a challenge, Gilmore does just that.


As the aliens begin to descend upon London, is it fantasy or reality? Soon they are fighting and running for their lives and Palma does not let up with his blend of history and fantasy.  From page one, the story will grab a hold of you and not let go until the final conclusion.  Entranced? Absolutely! I loved this book! You don't have to read The Map of Time to read this one, but I highly urge it.  It too is wonderful!

*I received a copy of this book in exchange for an honest review.
Posted by Minding Spot at 2:00 AM