The Treasure Keeper by Shana Abe` 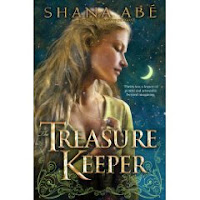 THE TREASURE KEEPER, the fourth installment in the drakon' series, picks up where the previous installment, Queen of Dragons, leaves off. The brother of the Alpha, Lord Rhys Langford, had been attacked and is now being held captive.

Zoe Cyprienne Lane is the daughter of the town seamstress. Growing up, she thought herself plain and fervently wished that she would be granted the gift of smoke and the Turn. It was very rare for the females of their clan to shapeshift into smoke or dragonform, and Zoe was no exception. When young Rhys would float outside her bedroom window in dragon form, wanting her to meet him in the nearby woods, she turned her back on him. She knew without any exceptional gifts or beauty she would never fit into Rhy's league. Years later she catches the eye of Hayden James. After courting awhile, Hayden proposes and Zoe accepts. She doesn't love Hayden, but believes he is a good man and that they will make a decent life together. When Hayden is sent out by the council to journey to the Carpathian Mountains to gather aid, Zoe is patiend and waits. But when Hayden's letters abruptly stop, she knows something is wrong and leaves the shire to look for him herself. Unknown to anyone, Zoe has her own unique gifts that may be just the weapons they need.

Lord Rhys Langford believes himself to be dead. It is always dark and a melodotic tune is always playing in his mind. But when he sees a light for the first time, he pulls himself to it and is stunned. There she lies in overwhelming light and beauty, Zoe Lane. She can see and talk to him, but she cannot touch him. Rhys is in spirit form. Wherever Zoe is, Rhys can follow her as long as there is a reflection for his spirit to jump to and fro, such as a puddle, a mirror, a wineglass or a window. Zoe fights her attraction to him as she is betrothed to Hayden.

Rhys pleads with Zoe to return to the safety of their shire, but she is determined to find Hayden. She shows Rhys her unique gifts, turning invisible and catching thoughts, to prove that she can take care of herself. With Rhys's spirit by her side, Zoe unexpectedly runs into the young Prince of the Carparthians, who in a turn of events, leads her to Hayden.

Hayden and the Prince had been watching a ramshackle house they thought to be holding the Lord Rhys captive. The three of them make plans to infiltrate the house, but it may already be too late for Rhys.

THE TREASURE KEEPER is a beautiful addition to the drakon' series. As the plot twists and thickens, the bond between Rhys and Zoe strengthens. You won't want to miss a drop of this sparkling and magical adventure!
Posted by Minding Spot at 11:49 PM