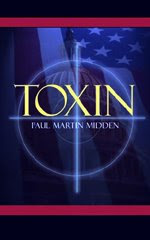 Jake Telemark, a junior senator from Wisconsin, enjoys his position as a moderate, common-sense legislator in Washington, D.C.—until the phone call that changes his life forever. Isadore Hathaway, daughter of the late Frank Hathaway, a renowned senatorial powerhouse, demands to see Jake immediately. During a mysterious meeting with Isadore, Jake learns an uncomfortable truth: a group of fanatical right-wing evangelicals, who call themselves The Bookkeepers, are planning to destroy the US democracy.

Shocked by Isadore’s revelation, but initially unwilling to get involved in something he can scarcely believe, Jake soon learns why Isadore Hathaway singled him out for this clandestine meeting: she’d uncovered a part of Jake’s past that he’d fought to keep hidden, not just by law, but by of the demands of his sanity. Isadore’s plea is both startling and matter-of-fact: she wants Jake to kill the men involved in this sinister plot—because if Jake doesn’t kill them, they will kill him.

When parts of Isadore’s scenario begin to come true, Jake becomes ensnared in a dangerous and deadly plot. With the country at risk and freedom hanging in the balance, Jake is thrust into excruciating circumstances. Forced to confront the demons of his past, and the demons that threaten the future of the country he serves, Jake inconveniently falls in love with Isadore. As this burgeoning relationship plays out against the backdrop of the most tumultuous time in US history, Jake Telemark must wage an intense tug-of-war between his promise to never harm another human being, and his duty to the country, and woman, he loves.

A gripping first person novel that reads like non-fiction, Toxin is briskly-paced and filled with urgency. Part provocative political thriller, part powerful psychological narrative, Toxin delivers a terrifyingly-real storyline that deftly blurs the lines between fiction and reality. Novelist Paul Martin Midden displays remarkable dexterity in his extraordinary character development, exquisite understanding of the texture and complexity of human relationships, and ability to keep the pages turning in this powerful thriller.

I had the opportunity to interview Mr. Midden

Your recent release, Toxin, is filled with government conspiracies and religious factions. Where did you come up with your ideas and did they relate any to your psychology profession?

Each of my books begins with an incident that occurs and plays itself out over the course of the novel. In this instance, it was an experience of a junior US Senator who was mysteriously contacted by a woman he did not know. It set up the intrigue and entry into the subsequent action, which developed along the lines of the plot. It is hard to say where the rest of the action came from because of how I write fiction. I explain a little about this later on.

With regard to the basic conflicts in the book: the tensions between government and religion do not specifically have much to do with my work as a psychologist. I think it has more to do with the conflicts that have swirled around those issues in the news for the past twenty or so years. I think the capture of the Republican party by right wing religionists had a profound impact on the party and for the country over that time. I am not opposed to religion at all. I do not think, however, that we should return to a time of state-mandated religious practice. I believe pluralism works fine.

Now some parts of Jake’s character are of course related to my work. He suffers from Post-Traumatic Stress Disorder; he has psychological issues involving his past; and he has an unstable relational life. All of this comes together in his relationship with Isadore in the book.

Tell us a little bit about Toxin please.

Toxin is about a junior senator, Jake Telemarck, who gets involved in a plot by a woman, Isadore Hathaway, whom he does quite believe at first. It charts the trajectory of a conspiracy and his efforts, along with Isadore, to counter it. A lot happens in the process.

How long have you been writing?

I began writing about four years ago, mostly as a pastime.

What attracted you to the mystery genre?

I wasn’t specifically drawn to any particular genre. I wanted to experiment with alternative styles of writing. So for Toxin, my second book, I used a first person narrative structure rather than the third person one that I used in Absolution, my first novel. It was a bit of a surprise to me that it ended up being reviewed by mystery and thriller reviewers, although if I had thought about that it was understandable. It is an action-packed mystery.

Do you have a favorite contemporary mystery author?

Not a favorite, but I like the Jack Reecher novels by Lee Childs.

Do you have a favorite "classic" mystery author?

Not especially. I enjoyed Robert Ludlum and read almost all of his books. I also enjoyed the movies with Matt Damon.

Tell us a bit about yourself; where you grew up, what jobs you had, schools you went to.

I am a rather typical baby-boomer: born in 1949; grew up in a working class section of South St. Louis. My parents were traditional Catholics: they had ten kids. I was the eighth. I left home at about age fourteen to enter a seminary boarding school. I left after six years, finished up a bachelor’s degree in philosophy, and joined the Peace Corps. I spent two years teaching English in a secondary school in Morocco, where I learned French and Arabic. I returned to the States for graduate school at St. Louis University and got a doctorate in the late seventies. I have been in clinical practice as a psychologist ever since.

Mostly I have worked in intensive therapeutic settings: hospitals, residential programs, intensive outpatient programs. That’s what I do now. I have always thought that history and literature were better preparations for understanding people than many of the often passing psychological theories that breeze in and out of fashion.

In the meantime, I got married and have two children. My wife and I rehabbed a wonderful turn of the century Romanesque house in a venerable neighborhood in St. Louis. We’re rather militant city-dwellers. And within this past year we became empty-nesters.

Tell us something about you that few other people know.

That would be hard: I’m a fairly transparent guy. You get that way working with people for so many years.

What is the best advice about writing that you have ever gotten (and from whom, if you recall)?

The first piece of advice was from a creative writing instructor in college, who said simply, Write about what you know. I believe the advice was originally from Sherwood Anderson. It is simple, basic, and vital.

The second piece of advice was from Ann Lamott’s book Bird by Bird. In it, she described her discipline for writing: write five hundred words a day, return the next day to review and revise; write another five hundred; repeat each day. I loved this method. It enabled me to taking writing in bite-size pieces and to experience what it was like to see a story unfold over time. Prior to this, I had an idea that it was important to chart the whole course of a book out ahead of time. The actual experience is not even close to that. Subjectively, it was as if I were channeling something rather than creating it. It was a pleasurable and awesome experience.

What book is on your nightstand now?

James Hillman’s The Soul’s Code. He is a Jungian analyst who popularized key concepts of Jung’s thought.

Do you have a favorite line from a book or a special quotation that inspires you?

I have lots. I collect quotations that strike me. Toxin begins with one of them: Nothing great is achieved without danger. It’s from Niccolo Machievelli.

What are you planning to publish next?

I recently completed a third novel entitled One Voice Too Many, which is about a man who fights valiantly for his sanity. It is also a thriller, but a more psychologically informed one.

A big thanks to Mr. Midden for being generous with his time to answer some of my questions!

Paul Martin Midden is giving away a signed copy of his book, Toxin, to one lucky tour visitor. Go to his book tour page, http://paul-martin-midden.omnimystery.com/, enter your name, e-mail address, and this PIN, 4839, for your chance to win. Entries from Wendy's Minding Spot will be accepted until 12:00 Noon (PT) tomorrow. No purchase is required to enter or to win. The winner (first name only) will be announced on their book tour page next week.