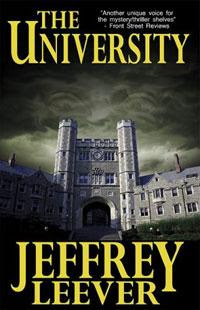 When investigative journalist Kevin Gibson lets his cousin, a former cop, talk him into looking into a student's disappearance at Tremont University, he gets more than he bargained for. A former student--injured in a brutal attack two years ago and in a coma--may hold a critical piece of information that can solve the mystery. Meanwhile, an attractive coed continues to hide a very dark secret.
Tremont junior Brett Duncan is determined to find out what happeded to his best friend, who's gone missing. Along with his girlfriend Ciera Kindle, Brett is drawn into a cunning world few know exist--a conspiracy involving faculty, students, and some well-connected people in high places. Beneath the campus' upstanding exterior lie many secrets, and a pulse-racing mystery with plenty of chills along the way.


On Bad Dreams and Why I Wrote The University
Ever wake up from a nightmare that seemed so real it took you half the day to recover?
Yeah, me too. And that’s what prompted me to write my latest suspense/mystery novel, The University.
One of the early scenes that serves as a setup for the entire book is based on a dream I had in my early twenties -- one that both fascinated and terrified me: My best friend disappeared. There was a strange woman involved. A bizarre setting, strange chanting, freaky lights, and a hole in the ground that seemed like it wanted to swallow my soul. What was that all about? I thought, when I realized the dream wasn’t real. Only problem was, I wasn’t sure I wanted to know the ending.
But eventually I wondered…maybe if I’m afraid of this story, it’s a mystery that I should write. (After all, why should I be the only one who is afraid? Sharing is good…)
I began to ask some what-ifs and eventually the story took shape. What if there was a college student named Brett Duncan whose best friend disappears one evening, and he has to figure out why? What if I added a strange cult group to the mix along with some creepy tunnels underneath a college campus? What if there is a mysterious young woman involved?
Then Brett turns to another young lady for help (perhaps misguidedly). The local police don’t seem all that interested in assisting him, so Brett is basically forced to become an amateur sleuth to try to find out what happened to his friend -- and really not liking where the answer leads him.
As Brett tries to uncover his friend’s fate, what he doesn’t know is that an investigative journalist named Kevin Gibson is looking into a murder case from two years ago that could be related. Brett also gets help from a former cop who was kicked off the force for looking into previous occult activities involving faculty and students at the university.
Underneath the campus lies a series of dark tunnels that are frequented by some extremely bad people. To complicate matters further, Brett seems to be falling in love with a coed named Ciera Kindle at one of the most inopportune times in his life. But Ciera has some secrets of her own.
The University is set in , and there are several autobiographical elements to the story. The key one would probably be that the college I attended did have an underground series of tunnels beneath its campus. I also share a lot in common with a couple of my key characters.
Bottom line: I wrote The University because I couldn’t get that dang dream out of my head.
I do wonder if the novel ends differently than my dream would have. But unless it comes back some night, I guess I’ll have to stick with my written version. - JL

He is a former PR staff member for Colorado Governor Bill Owens, as well as former senior editor for a nonprofit organization. He now lives in Blue Springs, Missouri.

A Nebraska native, he wrote a college football column, the Scarlet Commentary, for several years. He holds a degree in English with a writing emphasis and is perpetually at work on his next suspense/mystery novel.

To learn more about the author and the book, visit his website at JeffreyLeever.com.


Enter to Win a Copy of The University, Signed by the Author
Go to OmniMystery and enter! You'll need your name, email and this pin number 7870.  The Pin will expire at midnight tonight, so get your entry in quick!
Posted by Minding Spot at 8:43 AM

Email ThisBlogThis!Share to TwitterShare to FacebookShare to Pinterest
Labels: giveaways