A Death in C Minor by Rebecca Yount

From Amazon - Determined to rebuild her life following a suicide attempt, beautiful young American concert pianist Jessica Beaumont retreats to a 17th century cottage near the village of Kenwick, in rural England. She is embroiled in the murder investigation of a secretive neighbor who was hacked to death in his manor house with his own kitchen cleaver. She soon becomes romantically entangled with one of the murder suspects, a handsome wealthy landowner. Hungry for love, she flings herself full-tilt into an affair with him. Then, on a rainy evening, Detective Inspector Michael "Mick" Chandra of New Scotland Yard shows up at the door of her rented cottage, informing her that he has been assigned to reopen the case. Against the backdrop of a violent murder evolves a passionate love story. When Jess herself finds the critical clue to the killing, she is threatened to become the next victim. 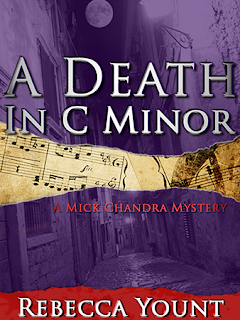 C Minor is the the tragedy note and Jessica has certainly seen her fair share of tragedy.  After her husband ran off with his secretary, Jess had no time to recoup from her loss before her ten year old son was killed by a hit and run driver.  Devastated, she couldn't hold it together on the stage and fled to Kenwick, a rural village in England to grieve and move on with her life.

There, she makes some new friends but is fascinated by the murder of a neighbor who was killed by his own kitchen cleaver.  It's unsolved and every time she brings up the issue, those surrounding her get real quiet.

Mick Chandra  specializes in cold cases and this case recently came across his desk.  He is determined to figure out who killed the man, but he needs a place to stay.  He knocks on the door of  the Briar place, a place he has stayed before, only a beautiful woman answers instead.  Happy to help, Jess lets Mick stay while he works the case, but she doesn't tell him her son visits her in her dreams, telling her that she is in danger.

When the investigation heats up, Jessica's life does become in danger. But as her relationship with Mick deepens into something more,  the stakes get even deeper as an attempt is made on her life.  Will Jess live to see a possible future with Mick? Will Mick finally be able to shut the cold case with justice served?

With compelling characters with their own baggage, they seem real to the reader as they try to unravel the knots in their lives and find a way to move into their future. The detective work is not overly done so the reader can keep up with the clues, but not figuring out who did it until Yount's leads us to the conclusion.  Well done and I'd love to read another installment in this clever mystery series!