Jen Jones hides a horrible secret behind her new degree, toned body, and exciting job at Silicon Valley’s hottest startup—until a man linked to her past is killed in a hit-and-run. CEO and founder Dave Jewell is about to land a huge deal. He doesn't need blood on his car, threatening phone calls, and Jen wrapped in broken code and blackmail. A gang of thugs hunts Jen, and she takes refuge in Dave’s protective arms. Together, they must thwart a killer and rescue an innocent victim from their past. Love blossoms, but a damaging revelation points straight at Jen, threatening to tear them apart forever. Content advisory: language, sexual situations. 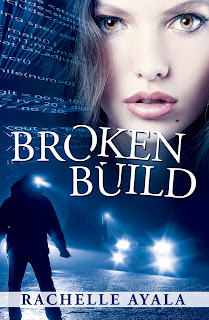 Jen Jones has secrets.  In fact, she's even had some work done to help change her physical appearance. She writes computer code at a small company run by David Jewell.  She's in love with her boss, even though he doesn't know it.  She doesn't want to get too close because he may figure out her secret - a secret that could bring her house of cards tumbling down.

David Jewell just wants his daughter back.  She was kidnapped and he believes his dead wife's family has her, but he can't find her and he can't prove it.  His computer build business is promising and he believes he might have the one code that could make him rich, except for the fact that Jen's builds keep breaking.

When Jen's blackmailer insists she steal the code that will bring in the riches, Jen does it, even though she is very uncomfortable with it.  But when the blackmailer winds up dead, and David gets a demand from his daughters kidnappers wanting the code, Jen finds herself in over her head.  She and Dave get closer and the romance blossoms, but the heart-pumping action as well as secrets that need revealed will leave you totally immersed in this action-packed mystery romance.

Broken Build starts out slow, but once you get into the story, it's a page-turning thriller.  The characters are intriguing and the computer lingo isn't overly technical.  There are a few swear words as well as some sexual relations, so I would recommend this to a mature reader.  But if you enjoy romance, mystery and action, I'd definitely recommend Broken Build!

I received one or more of the products mentioned above for free using Tomoson.com. Regardless, I only recommend products or services I use personally and believe will be good for my readers.