The Cuckoos of Batch Magna by Peter Maughan

When Sir Humphrey Strange, 8th baronet and squire of Batch Magna departs this world for the Upper House (as he vaguely thought of it, where God no doubt presides in ermine over a Heaven as reassuringly familiar as White's or Boodle's), what's left of his estate passes, through the ancient law of entailment, to distant relative Humph, an amiable, overweight short-order cook from the Bronx.

Sir Humphrey Franklin T Strange, 9th baronet and squire of Batch Magna, as Humph now most remarkably finds himself to be, is persuaded by his Uncle Frank, a small time Wall Street broker, to make a killing by turning the sleepy backwater into a theme-park image of rural England, a playground for the world's rich.

But while the village pub and shop put out the Stars and Stripes in welcome, the tenants of the estate's dilapidated houseboats tear up their notices to quit, and led by randy pulp-crime writer Phineas Cook and the one-eyed Lt-Commander James Cunningham, they run up the Union Jack and prepare to engage ... 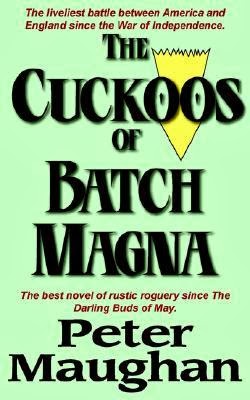 When I first got this book I was so excited to start reading. It sounded so good.  The residents of a tranquil river community going up the against the new estate owner from America.  But, within a couple of pages I realized that I would not like this book. Even with it being a genre I enjoy, I just found this story written with so much descriptive language that you actually don’t understand the basic plot points.  Peter Maughan’s description of Batch Magna and its inhabitants is so flowery that I actually couldn’t tell one character from another.

I was hoping that as I read this story would start to come to life for me. Unfortunately it did not and with that,  it is definitely on my “dislike” list and I can’t recommend it.

Peter Maughan is an ex-actor, fringe theatre director and script writer, married and living in the Welsh Marches, the borderland between England and Wales, and the backdrop to the Batch Magna novels, set in a village cut off from whatever the rest of the world gets up to beyond the hills of its valley.

*I received a copy of this book in exchange for an honest review. Stephanie
Posted by Minding Spot at 7:33 PM