With this exciting third entry, the Rogue Hunter series sheds its skin and gives us an intimate look into the life of the greatest bounty hunter in the galaxy…

While resting at Space Station Phoenix, Zyra Zanr comes down with a mysterious sickness. She meets Ryan Grant, the station doctor. Fearing that she is dying of a terminal disease, Zyra turns to Ryan for support. But things spiral out of control and their budding friendship explodes into a full-blown romance.

Their tryst inflames the wrath of Ryan's jealous wife, ultimately leading to betrayal and murder. Even as her health worsens, Zyra's uncontrollable desire for Ryan takes her down a dark path of unbridled sensuality that threatens the destruction of her very soul.

LIFE FORCE is the most powerful Rogue Hunter novel yet. Kevis Hendrickson has taken the series to a whole new level. 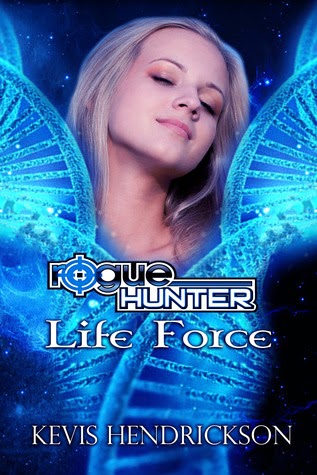 I will admit that throughout the first half of this book, I was deeply disturbed.  I didn't like Zyra at all as a character.  She's morally bankrupt.  Not only that, I felt like I was reading pornography.  I'll admit, the scenes are well-written, but I wasn't expecting quite so much erotica and quite so little story line.  I even thought about requesting to not do the review and stopping where I was.  I'm not against erotica, I just find it annoying when I want action and mystery.  According to the previous reviews, that's what these books are all about.  Kevis does include a forward explaining that he's branching the series in two different directions, however, not being familiar with the series previously, it didn't make any sense to me.  Until I started reading.

I did a little research and realized I must be missing something. Every single reviewer has given this great ratings.  I don't normally check other reviews while reading a book, but when I fear I must be off-track somewhere, I try to see what I'm missing.  Well, here's what I was missing.  I haven't read any of the other stories and I hadn't finished the book.  Zyra is a beloved character.  By this stage, she's able to make some morally bankrupt decisions without having her rabid readers hate her for it.  They may shake their head in wonder, but that's about it.  For myself, having no investment in Zyra, I had a different reaction.  So, I plugged on, and I'm thankful I did.

Entering the second half of the book, I started to realize why the first half had so many erotic scenes in it.  It was setting the stage for the second half.  Gotcha!  Once we get past the first half, we actually find a thrilling story developing.  There's more action and drama.  Quite a lot, actually, and though I still didn't become a fan of Zyra, I didn't detest her quite as much.  In an attempt to make her a more balanced character, I found she switched between two different personas.  She was either super-whiny female whom I wanted to smack, or superhero.  During the superhero moments, I actually began to have a little respect for her.

The most intriguing part of this book for me is the way that a super villain is created.  It's something right out of Marvel comics.  I don't want to say too much because I'm afraid of putting in spoilers, but I'll say that this part of the book made all of the trial of the first half well-worthwhile.

If you're interested in checking out a series with a strong female character and plenty of action, this could be it for you.  I can definitely see most of my friends enjoying this series.   However, please don't start with this book.  Start at the beginning and work your way here.  Though it works fine as a standalone, you won't get as much out of it as others who have started at the beginning.

*I received a copy of this book in exchange for an honest review.  Shawn