The Last Time I Saw You by Eleanor Moran

When Olivia Berrington gets the call to tell her that her best friend from university has been killed in a car crash in New York, her life is turned upside down. Her relationship with Sally was an exhilarating roller coaster, until a shocking betrayal drove them apart. But if Sally had really turned her back, why is her little girl named Olivia?

As questions mount about the fatal accident, Olivia is forced to go back and unravel her untangled history. But as Sally's secrets start to spill out, Olivia's left asking herself if the past is best kept buried. 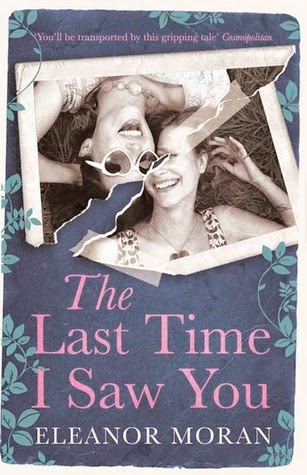 I read the chapter summary on the back cover to get a brief idea about what this story would be about. After reading the summary I was really excited to start reading this book. After reading the first two chapters however I realized that I was a little confused about what was already happening in the story. I ended up having to reread the second chapter one more time in order to remember what I had just read. I already was a little bored with the story and I was ready to put the book down.

After reading the second section of the second chapter I really started getting into the characters and their backstory and I couldn’t wait to get to the next page. Although I was able to enjoy certain parts of the story I still found it to be a confusing and somewhat long story that could have been a little shorter than it was. I really liked the differences between “Sally” and “Olivia”; I was able to see why they had become friends in the first place. I think the author could have made the story a few pages shorter than she did.

I think Ms. Moran did a wonderful job getting the reader to feel the same emotions as her main characters did. One thing I didn’t like was how confusing the chapters were; where I thought another chapter would start it turned out to be a memory and “Sally” or “Olivia” would think what had happened at the moment. Most of the “memories” if not all of them were things that “Olivia” was remembering. I liked the idea of some of the chapters being dates, but then I would get to the page where it would say Chapter three and then be a little frustrated because I thought the previous section was the chapter.

I didn’t really care for this book, but I think it will depend on the person as to if they will like this book or not; I personally did not like this story. I give the book a “C” and the author a “B.”

*I received a copy of this book in exchange for an honest review. Tiffany
Posted by Minding Spot at 3:54 PM