The Troublemaker Next Door (The McCauley Brothers #1) by Marie Harte

He can fix her sink, but can he wrench his way into her heart?

Flynn McCauley never thought he’d be so cliché as to fall for the girl next door. But when Maddie calls him over to help fix her faulty sink, he’s a goner. Too bad the fiercely independent interior designer wants nothing to do with him. Even worse, he’s forced to rely on the advice of his nosy brothers—and his five-year-old nephew!—to figure out how to make her give him a shot. 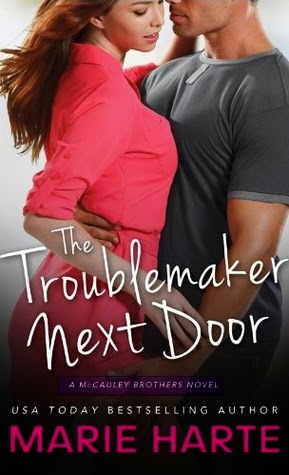 Whew, this is one sexy read! I thought it was going to be a sweet, tame romance novel. But tame it was not. This book has some seriously HOT sex scenes which include one fiery redhead and one majorly sexy plumber! But what I really loved is that the whole story is not purely sex, although there was a lot of it.

The storyline does not lack substance just for the sake of getting it on, but instead has well written characters with friendships and family ties that not only flesh out this romance but set the stage for more novels based on those characters too. For instance the main character, aka the sexy plumber Flynn, has some very hot brothers that I can't wait to read about in the next books. Although I'm not sure if I will like them as much as Flynn. He is the kind of man who is sexy, nice, masculine, and great in bed. How can you top that! Not too mention how he not only accepts Maddie's flaws but loves her even more for them. * insert swoon here *

*I received a copy of this book in exchange for an honest review.  April
Posted by Minding Spot at 4:13 PM