Jaguar Hunt (Heart of the Jaguar #3) by Terry Spear

An agent and a jaguar-shifter chase trouble, and each other, through the jungles of Belize...

Agent Tammy Anderson has a reputation: she prefers to work alone. So when she’s paired up on a mission with jaguar-shifter David Patterson—who’s only recently been released from jail—to say she’s less than thrilled is a understatement. Until she realizes that this sexy agent has what it takes…


Soon, what started as an “easy” mission to locate a missing jaguar takes the pair to Belize, where they’re chasing down two renegade teen shifters who know more than they’re telling. As the action heats up, can they keep their minds on the job and off of each other? 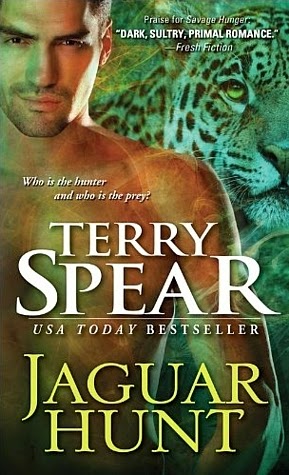 David is tracking two teenage shifters to recruit them to his agency. Tammy is looking for a jaguar missing from the zoo. When their missions combine they are teamed up on an adventure that leads them to Belize, and things really heat up!
David is one sexy jaguar shifter and the chemistry between him and feisty feline shifter Tammy was definitely HOT. I've never read about jaguar shifters before but now I see the error of my ways. I think it's hilarious that Tammy usually ditches her male counterparts who assume she will be a liability and solves the case without them. That's my kinda girl! It also made me really like David when he saw how much of an asset she was and how capable a strong independent female can be. I also liked that although Tammy is very capable of doing things on her own that she was not as witchy as women who like their Independence are sometimes portrayed and not opposed to David's help once he earned her respect and trust.
Jaguar Hunt is book # 3 of the Heart of the Jaguar series. Although it references characters from the other books I think it works really well as a standalone too, considering I never read the others and loved the story and never felt lost. In fact I'd really like to read the first couple books now just to delve even further into this tantalizing world of jaguar shifters.
Jaguar Hunt is intoxicating and sensual with a great storyline. I highly recommend it to fans of shifter romances with some action and suspense.
*I received a copy of this book in exchange for an honest review. April
Posted by Minding Spot at 11:30 AM