Rare Bird: A Memoir of Loss and Love by Anna Whiston-Donaldson 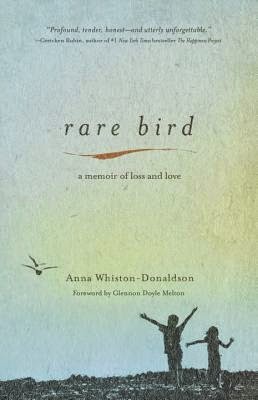 Rare Bird:  A Memoir of Loss and Love by Anna Whitson-Donaldson is the story of how Anna, a mother of two, walked through grief for the first year after her son, Jack, died.  It is profoundly sad, moving, and at the end, hopeful.
In 2011, Jack Donaldson had just started 7th grade.  The eldest child of suburban parents, Jack was a bright child who loved Legos, and playing with his friends.  On the second day of school, he asked his mother if he could go out and play, in spite of the rainy weather.   She said yes but became worried when she heard thunder.  When she went out looking for Jack, she discovered that he had been swept into Piney Branch Creek, a creek that had overflowed during the storm.  Jack’s body was discovered a short distance away.
Rare Bird chronicles her thoughts and feelings about her grief and how she managed to fit this experience into her view of God.  Raised a Christian, Anna prayed and believed, but this was the worst thing that she could imagine.  How could a loving God have allowed this to happen?  Where was He when her son died?  Why did He not intervene?
Through a series of “coincidences” and events, Anna begins to see that Jack is not really totally gone—nor will he ever be.  His life and legacy will live on in her heart and the lives of those he touched.  It was really remarkable to read about the overwhelming show of support that Anna and her family received, even long after Jack’s death.  She truly has an amazing set of people surrounding her.
Anna does not sugarcoat the anger, fear, and struggle she experiences.  She also does not seek to idealize her son by making him into an example of the perfect child.  She just tells the story of her gradual understanding and her attempt to make sense of a world without her son in it.  She especially thanked and appreciated the people who kept showing up for her—even when they found it uncomfortable to do so.  I will remember this when I deal with grieving people.
Rare Bird left me with some hope, but no answers (not that answers could ever be satisfactory anyway).  It also left me with a love for Anna’s son Jack, a gratefulness for real community, and a knowledge that we are all at the mercy of an unpredictable world.  While she comes to some conclusions about God and continues to see Him as good, her relationship with Him is transformed as well.
Rare Bird is an easy book to read—but a hard book to read as well.  Recommended.
*I received a copy of this book in exchange for an honest review. Regina
Posted by Minding Spot at 4:27 PM