Every Demon Has His Day by Cara Lockwood 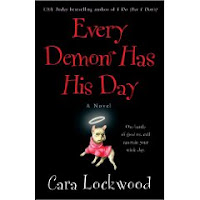 Being the Chosen one isn't all fun and games. Constance can only beat the headaches from her visions with Dr. Pepper, and the snoring from her dead almost ex-husband is keeping her awake at night.
Constance Plyd is having a bad day. Her husband, Jimmy, is taking his own sweet time signing their divorce papers. Her restaurant is in the red, and she is knee-deep in bubbles because Jimmy decided to help with the dishes for the first time in their relationship by filling the dishwasher with Tide. To make matters worse, while she is mopping up the sudsy mess, she hears a large racket from the attached garage. Not knowing what mess Jimmy now made, curiousosity gets the best of her and she finds her husband face down on the floor with a screw-driver poking out of his back. Standing over him is a large, dark man wearing a baseball cap who claims he is a demon who immediately disappears.
Nathan Garrett used to be a real ladies man. Back in his teenage years, he was known to have de-flowered many of the local ladies and keeping notches in his bedpost. Constance was number twenty-two. But Nathan has changed his wild ways and is now the town's local sheriff. When he arrives upon the crime scene at the Plyd's house, he can't believe how he let beautiful Constance slip through is fingers. Unfortunately for him, Constance is still mad at him for forgetting her. He never even spoke to her at the local Jiffy Lube. Now it looks like he may have to arrest Constance for the murder of her husband. With the five million dollar insurance policy, the evidence isn't looking favorably for Constance.
Constance swears that a demon killed Jimmy. Jimmy agrees. He is a ghost until the crime is solved and he annoys Constance by constantly appearing beside her. She starts having visions, and learns that she is a minor prophet. She can see the future. What her vision tells her is that Satan is coming to earth and is going to beget a son on one of the pop stars coming to film in their town. Unfortunately for Constance, a Pride and a Glutton demon need her visions to show who is destined to be the mother of the antichrist. They try many ways to get her to share her visions with them, even endangering her life. Nathan doesn't believe in demons and is determined to arrest Constance for the murder of Jimmy or see her put into an asylum.
EVERY DEMON HAS HIS DAY is a fun treat! Filled with snappy repartee, hilarious scenes, and a good vs. evil battle will have you entertained from cover to cover. The constant bickering between the demons and Constance and Jimmy had me rolling in stitches. The blooming romance between Nathan and Constance is sweet and heart-warming. The first work by Cara Lockwood I've read, I was absolutely charmed! I look forward to the next one, Can't Teach an Old Demon New Tricks.
Posted by Minding Spot at 9:34 PM