Feddie Girl: The Hilarious Adventures of an American Teen in a Nigerian Federal School by Nona David 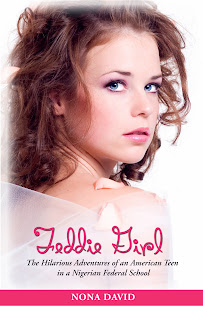 Carlotta Ikedi is a troublesome thirteen year old.  When she is caught smoking pot at school, she is suspended.  Her parents have already moved once because of Carlotta's problems, and they refuse to do so again.

They enroll her in a boarding school in Nigeria.  They hope that their pampered princess may learn a few things and hopefully straighten out her life.  Carlotta is furious her parents treat her this way and tries everything to get out of it.  When staying at her uncles house before school starts, she is determined not to attend the school.  She steals her mother's money and her passport in the middle of the night and runs off.  She quickly finds herself lost in Nigeria and doesn't know the language to really get where she wants to.

After she is brought back to her Uncles, she is taken to the school and is crushed when she learns she will have to wear a uniform, cut off her beautiful long hair, and no electronics, like her cell phone and ipod are allowed.  On top of all that, she is quickly called a "Feddie Girl" by the other girls.  A Feddie Girl is of mixed heritage.  Carlotta's father is black and her mom is white.  Almost all the girls at the school are from Nigeria, and Carlotta doesn't understand their ways.

She finds the food atrocious, the punishments demeaning, and manual labor beyond her.  She's never had chores or had to fend for herself before.  Thankfully for her, she makes quick friends and tries to stay out of trouble, although it doesn't last long.

Meanwhile, back in the states, Carlotta's father is being blackmailed if he doesn't return to his Family.  Her father is the heir to a mob family and they want him back, even if they have to get to his daughter to get his cooperation.  His marriage is on the rocks, and his wife is having an affair with one of her students.

When someone is trying to get Carlotta to leave school, faking lesbian love letters to her, she is determined to stay.  And she does, until one fateful night everything changes.

FEDDIE GIRL is an adventure that will have you laughing until tears roll down your face, gasping in shock, or shaking your head back and forth, unbelieving what is happening.  It's an adventure you won't want to miss.  I really enjoyed watching Carlotta mature and learing about how boarding school operates in another country.  I had some trouble with the Nigerian dialect, but it leads credence to the story.  The ending leads one to believe there is a sequel, and I certainly hope there is!  Character building, world development, and seamless writing have Nona David on the path straight to the top.  I really enjoyed myself.
Posted by Minding Spot at 10:37 PM