Wealthy entrepreneur Nigel Cain has devised an efficient new way to bring the earth's most precious resource - clean water - to the masses by transporting massive man-made icebergs from the frigid arctic and delivering them literally to the doorsteps of millions. Gabriel Pike works in a small engineering firm that has been handed the chance of a lifetime - they have been chosen to give the final safety approval to pilot the gigantic block of ice into New York harbor. A consummate showman, Cain has built a fabulous 5-Star hotel and casino high atop the iceberg so his celebrity guests and media elite can cover this news-breaking event from beginning to the end. Pike is whisked away and dumped in the lap of luxury where he is expected by all too simply rubber-stamp his inspection. A brutal winter storms ravages the iceberg and only through Pike's quick thinking are they able to survive. But the storm reveals more than Pike's ability to think on his feet, he makes some disturbing discoveries and has serious doubts about the safety or the real intentions of the project. A grisly double homicide on the ice puts the inspections on the back burner and Pike's life is suddenly spiraling out of control as he is accused of being the jealous murderer in a lover's triangle. But Pike soon discovers that there is far more than just his life on the line. He uncovers a conspiracy more heinous than anything he could have imagined - a plot that will level a city, change the political face of America and whose shock waves will be felt around the world. Now, if only he can only survive long enough to stop it. 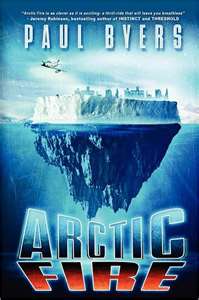 We're running low on fresh water.  What do we do? Let's move an iceberg! I love the premise!!  From the opening pages until the thrilling end, Arctic Fire is a heart-pounding adventure filled with risks, action and suspense.  With engaging characters and a compelling plot, you will be hard pressed to put this novel down.  Just when you think you know what is going to happen, with who and what, the author delivers another surprising twist that will keep you on the edge of your seat.  The character are concealing and manipulative, yet believable.  The rush of adrenaline is well-rehearsed with each operation, leaving the reader frantically turning to the next page, desperate to find out what is going to happen next.

This is the first work I have read of Paul Byers, but he reminds me a lot of Clive Cussler with a twist of Brian Freeman - which is an excellent pairing!  Arctic Fire is a novel that showcases his effortless feel for narrative as well as his flawless instincts for suspense. I can't wait to see what Byers has in store for us next.  I definitely won't want to miss it!

*Make sure to stop in tomorrow for an interview with Mr. Byers as well as a giveaway opportunity!