From a Killer's Mind by Jason Helford

John has been a successful serial killer for his entire adult life, committed to his craft without detection or disruption. He’s spent years perfecting his process and meticulously planning out each kill, honing his abilities to horrible heights; however, when one kill doesn’t go as planned, his confidence is shattered, and his dark life starts down an even darker road, to either his salvation…or his ultimate downfall. John finds his private sanctum infiltrated by chaotic characters from the most unlikely of places, putting him through an existential crisis of the soul. As John loses control, his true crucible begins. 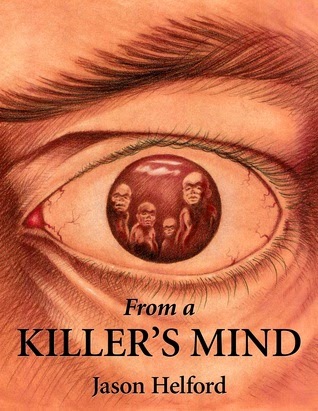 John has been a successful serial killer for most of his adult life.  Now, all of a sudden, he thinks he may be cracking up.  Things aren't working the way they're supposed to.  Will his sanity hold up under intense pressure?

I love thrillers and horrors.  I simply love them.  When a book can frighten me, you know it's truly good.  Read this one at night, alone, with a windstorm outside and I guarantee you will not sleep.  I heard every noise and imagined it was manifestations coming to get me.  I simply couldn't stop it!

Helford has a writing style that makes you forget that you're reading.  You're there, watching every slice of the blade, whether you want to or not.  You become a part of the story.  It's emotional and terrifying and powerful.

The character, John, is so multidimensional that you even by the end of the book, you haven't quite figured him out.  He's brilliantlyl written.  I've read a lot of serial killer books, and I don't think anyone has 'nailed' it quite like Helford.

For me, the best part was the sheer creativity.  This isn't your average hack and slash book.  There's so much psychology behind it, but even more so, simply slicing here and there doesn't do it for our killer.  He's brilliant and practiced and he knows what he needs to do in order to keep himself in working order.  Usually, this means horror from outside the norm.  If entrails make you nervous, you  may  not want to pick this one up.

I'm adding Helford to my 'to watch' list.  I can't imagine that anything following this book will be anything less than spectacular.  If you're looking for something to scare the bejeepers out of yourself, this is definitely what you want.  If you want a good mystery, pick this up!  Most of the book you don't know for sure what's real and what isn't and it's gratifying to finally figure it out.  If character studies are your thing, you'll be hard-pressed to find another one.  John's childhood was unique and the word 'traumatic' doesn't quite come close to covering it.  Who John has become as an adult, is another matter.  Then again, we don't really get to meet him until things have started spiraling out of control.

*I received a copy of this book in exchange for an honest review.  Shawn
Posted by Minding Spot at 8:47 PM