In a world at war, a slave girl’s lethal curse could become one kingdom’s weapon of salvation. If the curse—and the girl—can be controlled.

As a slave in the war-weary kingdom of Faelen, seventeen-year-old Nym isn’t merely devoid of rights, her Elemental kind are only born male and always killed at birth — meaning, she shouldn’t even exist.

Standing on the auction block beneath smoke-drenched mountains, Nym faces her fifteenth sell. But when her hood is removed and her storm-summoning killing curse revealed, Nym is snatched up by a court advisor and given a choice: be trained as the weapon Faelen needs to win the war, or be killed.

Choosing the former, Nym is unleashed into a world of politics, bizarre parties, and rumors of an evil more sinister than she’s being prepared to fight . . . not to mention the handsome trainer whose dark secrets lie behind a mysterious ability to calm every lightning strike she summons.

But what if she doesn’t want to be the weapon they’ve all been waiting for? 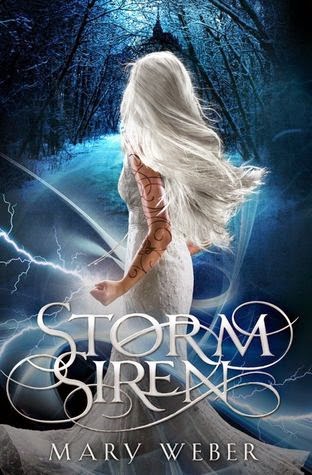 Storm Siren is like a beautiful enigma. It is a fantasy adventure with some romance and it has amazing character and world building without getting bogged down with details. In fact the world building is so flawlessly woven into the story that I felt it super easy to delve completely in despite this being a first book in the series.

The characters were amazing snd not at all like I'd expect. Nym is a slave and considered an abomination because of her elemental abilities, when she's bought by an eccentric new owner who wants to hone her abilities as a weapon of war, she meets an colorful and unlikely cast that I immediately took to. I hate to get too into plot details because I always feel like I'm going to ruin something for somebody, but let me just say I thought this book was brilliant. It has fantasy, adventure, romance, friendship, and suspense. Then I get to the end...

That ending. OMG I'm still like What?!!! I seriously re-read the ending a couple of times and then just sat there clutching my book like I was waiting for it to explain itself. But after reflecting on this I have to admit that was a bold and exciting twist, that has me pumped for the next book.

*I received a copy of this book in exchange for an honest review.  April
Posted by Minding Spot at 3:32 PM