Once Bitten by Kalayna Price 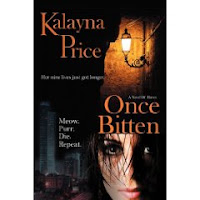 Kita Nekai has been lucky as she has ran for the past five years. Blending into the human world has come easier for her over time. She simply shifts into her small five pound cuddly kitten form and gets shelter and food from various cat-loving homeowners.
But in a new city, Kita's luck has run out. The hunters her father has sent, to retrieve Kita and bring her home, have been relentless. She uses every knack she has acquired over the past few years to allude them. When she leaves a party she has been hiding at, Kita is cornered in a dark alley. She knows her luck has run out, but she is rescued by a tall, dark, and handsome stranger, Nathaniel Deaton.
When Kita wakes up the next day, she freaks out. She is naked and locked in a cement block cell. To make matters worse, she is terribly thirsty. Her keeper feeds her a mug of blood and Kita is disgusted with herself for liking it! Nathaniel has turned her into a vampire, and now for some reason, she can't shift into her cat.
Nathaniel explains to Kita they must meet the Vampire Counsel, as it is the law for all new vampires. But before they can do so, an underworld magistrate pops up and accuses Kita of creating a murderous rogue. A rogue who is killing people all over the city. Nathaniel has seen into Kita's mind and knows she is innocent. They decide to work together to discover the real culprit, because if they fail, Kita dies. Nine lives and vampire immortality won't keep her alive if she is found guilty.
Kaylana Price's debut novel, ONCE BITTEN, is a sure fire winner! Adults and teens alike will enjoyo this paranormal fantasy. Kita is a gritty, stubborn character who meshes nicely with Nathaniel's cool and calm demeanor. I hope to see more of Kita and Kaylana Price in the future!
Posted by Minding Spot at 11:12 PM