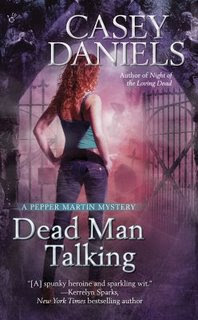 Move over American Idol. Reality TV has come to Cleveland and Pepper Martin is a part of it!

When Pepper arrives at a down-on-its-luck cemetery to help with a restoration project she learns, to her dismay, that there’s going to be a contest to restore the cemetery grounds. Even worse—it’s going to be the basis of a local reality TV show, Cemetery Survivor. One team will be made up of genteel Historical Society ladies and the other—Pepper’s group—will be convicts on probation. Pepper Martin in day-glo? Now that’s a fashion don’t!.

There’s also a ghost waiting for Pepper. He claims he was wrongly convicted of killing a young woman. But it seems there’s quite a bit he’s not revealing. Pepper agrees to try to clear his name, but digging for the truth could put her in grave danger....