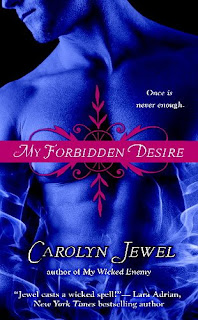 My Review: Alexandrine Marit is a witch. She's always known she was different when she was growing up, but not until she sought out her biological parents did she learn the truth. Her search leads her to Turkey and to the name of her father. She also is given an amulet that a woman claims once belonged to him. Alexandrine wears the talisman all the time.

When her brother, Harsh, suddenly appears in her apartment one day, Alexandrine is stunned. Harsh disappeared ten years ago, and the family believed him dead. He doesn't stay long though, just long enough to let her know that she was in danger because of the talisman, and that he had a bodyguard for her.

His name is Xia and he hates witches. Witches enslave and murder his kind, kin. But even though he hates Alexandrine's father, who recently had enslaved Xia, and despises the fact that Alexandrine is a witch, he is determined to guard her against the forces that would have her dead and the talisman theirs.

MY FORBIDDEN DESIRE is chock full of paranormal entities, down and dirty action, and steaming hot romance. Her first paranormal, My Wicked Enemy, was an exciting page-turner, and this one is even better and hotter!

About the Author: When not writing, Carolyn Jewel is a Database Administrator. She lives in northern California with her son, three cats, a border collie, several chickens, and some sheep. Carolyn Jewel has been writing stories ever since she could scribble. Now that she's grown up (mostly) she writes historical and paranormal romance because she loves history and imagining the lives of people who lived in years past, and because she's fascinated by the loves and travails of the not-exactly-human in any time period.

Chapter 1 of My Forbidden Desire is Here.

Hatchette Books is allowing me to give-away five (5) copies! You know you want a copy of your own so don't miss your chance!

USA & Canada Only
NO PO Boxes

Leave a comment, along with your email to enter.