The Sinful Life of Lucy Burns by Elizabeth Leiknes 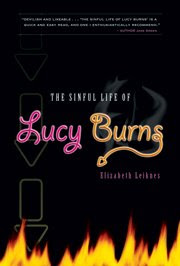 When Lucy was eight years old, her older sister Ellen was hit by a truck. Ellen was in a coma and Lucy was devastated. So, she wrote a letter to whomever it concerned that she would do anything if Ellen got better and placed it in their play mailbox outside. When Ellen miraculously woke up the next day, Ellen was overjoyed. But when she went to retrieve her letter from the mailbox, she was surprised with a new note addressed to herself wishing her a happy birthday.

Every year Lucy receives a phone call asking her for her birthday wish, and every year she receives it. When she graduates from college though, its time to pay her debt. She is to become the new faciliator for Hell and if she doesn't do her job well, then Ellen will go back to being rightfully dead. So Lucy leaves her family and sets out on her own.

Over time, Lucy has beauty, brains, wealth, and a dog named Pluto that guards the basement door; a portal to hell. But Lucy is lonely and wishes she had a family, a boyfriend or a child. But every time Lucy gets close to a guy she ends up throwing up. The boss figures a boyfriend would distract Lucy from her job, hence the nausea.

But when Lucy's neighbor gifts her with a surprise with concert tickets to her favorite singer, Lucy is thrilled. When Teddy Nightengale beckons Lucy to backstage, she finds out there is a loophole for Lucy to quit her job, but it comes with a very high price, one Lucy may not be able to pay.

THE SINFUL LIFE OF LUCY BURNS blazes onto the paranormal romance scene. A character who sparkles against the good old fight of good and evil is sure to leave you bursting for more. Chick-lit with a supernatural twist, a solid lead character whose antics will have you howling and an ending that will leave you highly satisfied and entertained. Absolutely wonderful!
Posted by Minding Spot at 8:19 AM