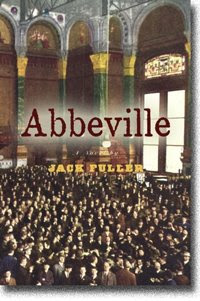 When I first read the back of the cover of Abbeville and saw that the main character's name was George Bailey, I was hooked. It's A Wonderful Life is one of my all-time favorite movies, so I was intrigued to read a story with that name. I also believe I sub-consciously wanted to see if there were any similarities between the two. However, this story isn't really about George, but about his grandfather, Karl.

George Bailey just lost almost everything in the 2000 dot com crash. To deepen his burden, his son Rob doesn't feel that he is worth anything and contemplates suicide. George seeks help in the only place he thinks he may find answers, the small town of Abbeville.

Abbleville is where George's grandfather Karl lived. George's memories take us through most of Karl's life. Karl was a powerful force in Abbeville back in the day until the stock market crashed. As the owner of the town bank, Karl lost big but still managed to pay the farmers what they had in the bank. Because of circumstances, Karl ends up doing jail time and upon his return he shies away from the townfolk because he doesn't believe he is good enough now. This is the only real similarity I found to the Wonderful Life George Bailey. George's thoughts travel to before this monumental event and after, leading up to his death. Using the legacy his Grandfather left him, George tries to connect with his own son, and find meaning within to surge forward to his own personal survival.

Jack Fuller based Abbeville loosely on the life of his own Grandfather. In parts, Abbeville brought back memories of my own Grandfather. I read Abbeville in one sitting. My surroundings simply faded away as I found myself immersed into the lives of Karl and George. The writing is seamless and poignant. Jack Fuller is a very talented storyteller and Abbeville is a magnificent tale.
Posted by Minding Spot at 12:06 AM