On the Bluffs by Steven Schindler 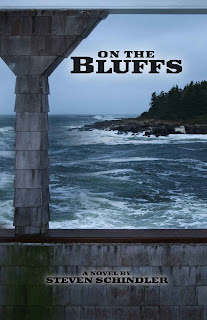 Brian DeLouise works third shift at a radio station, goes home and plays with is fantasy baseballs stats, sleeps, and does it all again the next day. He's not happy, he thinks his wife is cheating on him, and he wants more from life. On a whim, he decides to take a few vacation days and drive to the Cape to relive some of his most favorite memories. When he was younger he worked in a theatre in the Cape and stayed at an old mansion. There he fell in love with Portia, who later left on a trip to England and never called.

When Brian gets to the Cape, he is overwhelmed with nostalgia. He ventures to the old mansion and when he sees Portia, he is blown away. She is just as beautiful as she was twenty years ago. When Brian's wife demands a divorce, Brian just wants it over with. He has decided he wants to spend the rest of his life with Portia, even though she has just been diagnosed with a brain tumor.

There's also a dark force at work on the Cape. People are scared of Portia's brother Richard. He will do anything to get at the family fortune, or lack of, and will remove anything or anyone that stands in his way.

ON THE BLUFFS is a romance, mystery, and a journey for a middle-aged man who is finally growing up to live his life the way he wants to. Mr. Schindler spins a yarn so rich and full of vitality, that the pages almost turn themselves. The characters are unique, well-developed, and the repartee' between them is sometimes tender and witty. I fully recommend reading ON THE BLUFFS. It's not your normal coming of age novel, but your age of understanding novel. I look forward to reading more of Mr. Schindler's work in the future.
Posted by Minding Spot at 9:00 PM