The Murder of King Tut: The Plot to Kill the Child King - A Nonfiction Thriller by James Patterson & Martin Dugard 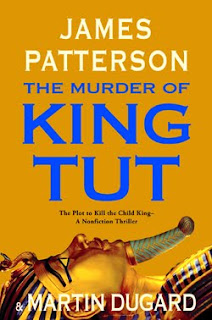 James Patterson and Martin Dugard take us on a journey through the life of King Tut and the Egyptianologist Howard Carter.

Using facts, meaning lots of research, Mr. Patterson comes to the conclusion that King Tut did not die from a broken leg, but was murdered. He takes us through the research that leads him to that conclusion, and who he thinks did the ghastly deed and why.

Reading about the Egyptians is really interesting and Mr. Patterson and Mr. Dugard have done their homework. We learn what they wore, what they ate, who they worshipped, and how they were mummified. We learn some politics, and how the title of Pharoah is declared. I opened the book uneducated in anything Egyptian, and left feeling I knew a little something now.

They take us on the journey and struggles of Howard Carter. Howard started as a sketch artist in the digs when he was quite young, and learned everything else by doing. He spends his life wanting to find a virgin tomb; one that has not been robbed of its mummy or it's riches. But that isn't the case. Almost every tomb he does find has been robbed. When the Valley of Kings is declared to have been emptied by another, Carter denies it. He knows there is still one more Pharoah to be found, King Tut, and he spends years looking for it, to no avail. His wealthy sponsor gives him one more year to find it or forget it. What transpires is sad, yet triumphant.

The Murder of King Tut is written in the same fashion as Mr. Pattersons' previous works, meaning it's a page-turner. I was up late, too late, as I couldn't bear to put it down until the end. His facts, based on research, told in a story form give credence to his shocking conclusion. This is the first work of Mr. Patterson's that I have read where he writes of himself, which I feel gave us a glimpse into his life and work and added an even sharper edge to the truth of the story. James Patterson has another best-seller on his hands. Even if you don't normall read non-fiction, you should read The Murder of King Tut. You will not be disappointed - it is a top-notch thriller of magnicifent proportions!
Posted by Minding Spot at 11:52 AM