Zan-Gah and the Beautiful Country by Allan Richard Shickman 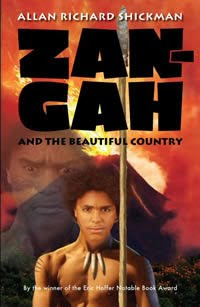 This stunning sequel to Zan-Gah: A Prehistoric Adventure begins with the death of Dael's wife.  Dael, who was captured as a child, could find no solace in this great loss and is deeply traumatized.

He awakes his twin, Zan-Gah, from a deep slumber and bids him to come.  Dael wants to find where the river begins, a quest he has wanted to do since he was a child.  Zan-Gah realizes that Dael won't be calmed and quickly gathers items for the journey, but he convinces Dael to let a few other people come with them.

Dael wastes no time in leading them back to the Beautiful Country, the land where Dael was held captive in a small cage for two years.  Dael wants revenge and he wants it now.  But when they reach the Wasp people, they find they are all dead, except one elder lady.  An elder lady who Dael swiftly vanquishes.  Zan-Gah knows something is wrong with his brother's mind, but he doesn't know how to cure him.

When they arrive back home, they convince the council to move the clan to the Beautiful Country, where the food is plentiful and the land beautiful.  After many months, they do so, and for a time everything seems to be working well.  Then the Noi clan moves nearby, and Dael won't be pacified.  That is the clan that originally captured him and sold him to the Wasp people.  Dael won't be satisfied until the river runs red with their blood.

Two clans at war, and one brother who cannot find his way back again are the key elements of this darker prehistoric novel.  The turmoil the clansmen and the brothers go through is remarkable, and Mr. Shickman sheds some light on other secondary characters that help us understand the reasoning and movements of the main ones.  The descriptions are magnificent and the action superb.  Young Adults and Adults alike will enjoy this series.  I certainly did!
Posted by Minding Spot at 12:36 PM