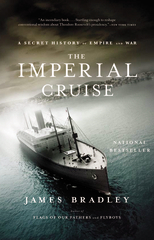 On the success of his two bestselling books about World War II, James Bradley began to wonder what the real catalyst was for the Pacific War.  What he discovered shocked him.


In 1905 President Teddy Roosevelt dispatched Secretary of War William Taft, his daughter Alice, and a gaggle of congressmen on a mission to Japan, the Philippines, China, and Korea with the intent of forging an agreement to divide up Asia. This clandestine pact lit the fuse that would-decades later-result in a number of devastating wars: WWII, the Korean War, and the communist revolution in China.

In 2005, James Bradley retraced that epic voyage and discovered the remarkable truth about America's vast imperial past. Full of fascinating characters brought brilliantly to life, The Imperial Cruise will powerfully revise the way we understand U.S. history.

This is a fascinating account at history you didn't know about.  The pictures alone tell a thousand words.  Mr. Bradley writes in a seamless fashion keeping the reader enthralled as the pages seem to disappear.  The story is captivating, yet shocking.  Historians will devour this one!

Thanks to Hatchette Books, I have three (3) copies to give away!!

USA and Canada Only.  No PO Boxes.
Comments are appreciated, but will not count for entry.
All entrants must fill out the form.
BONUS ENTRY
Follow Minding Spot on Networked Blogs
Contest will close on November 30, with winners being selected by randomizer.org on December 1st.  Winners will have 48 hours to claim prize and prize will be shipped direct from sponsor.