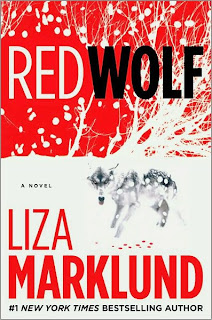 When I first heard that Red Wolf was coming out, I really wanted to read it.  She co-wrote The Postcard Killers with one of my favorite all-time authors, James Patterson.

From what I can see, Liza Marklund is a well-known author in Switzerland, and this is the first book of hers to be published in the USA.   Her popular series is Annika Bengzon, an investigative news reporter.

So what happened in the previous books in the series, I have no idea as this is the first one to hit the USA market.  What I do know, is that for a mystery/thriller reader, is that we have been missing out!

Annika Bengzton is an independent investigative reporter whose primary focus is on terrorism.   Forty years ago, terrorism was suspected when a fighter plane exploded, killing one.  Annika wants to do a series of articles about the attack because the fortieth anniversary is approaching and she believes it makes good news.

But, her boss doesn't want her to investigate it.  It's not current and therefore, no one really cares about it.  But Annika brushes off her boss's concerns and starts digging.  When a journalist she was supposed to interview is killed in a hit and run, she thinks his death is linked to the terrorist attack.  Then the witness of the attack is murdered.

Meanwhile, Annika is having trouble in paradise - marriage problems.  Already having anxiety issues, finding out her husband is having affair is just icing on the cake.  Trying to push her emotions down so she can concentrate on the case, she comes upon a small communists group calling themselves The Beasts.   It will take all of her sanity and wits if she hopes to find out the truth before a viscious killer makes her his next mark.

Heart-pounding and compelling, Marklund takes us on a twisted journey that will have you on the edge-of-your-seat until the final conclusion.  She deftly weaves suspense with the personal life of her heroine, Annika.  So well written, you will be up long into the night, burning the midnight oil, as you won't want to put this one down!