Interview with Tamara Hogan and Giveaway of Taste Me - today only!

1.      I love crime scene movies and paranormal urban fantasy.  What gave you the idea to mix the two together?
TH:  I don’t know that it was a conscious choice. I simply created the world I needed to exist in order to tell the stories I wanted to tell throughout this series. This book draws from many corners of the mythological world, from pop culture, from the romantic suspense tradition, and from modern media, suggesting alternate interpretations for history we think we know, and gives it all a sci-fi twist. I hope every reader finds an aspect of the Underbelly world that sticks with them, that they can connect with.


2.      If you could put your book on the big screen, whom do you envision playing Lukas and Scarlett?
TH: I don’t know that I’ve ever envisioned actors who could play Lukas and Scarlett on TV or in the movies—and gee, wouldn’t that be a fabulous problem to have!—because my physical templates for the characters come out of other slices of life entirely. My mental inspiration for Lukas (his hair, his size, and definitely his jawline) is football player-turned-Army Ranger Pat Tillman, who unfortunately died in Afghanistan. In my imagination, Scarlett looks quite a bit like former Hole bassist Melissa Auf der Maur. Any suggestions on this, readers?


3.      What books are currently on your nightstand or eReader?
TH:  I usually have three or four books going simultaneously, a mix of fiction, non-fiction and research. Mt. TBR is hundreds of books high, so there are so many great books that I’m so late to the party on! For fiction, right now I’m bouncing back and forth between Deirdre Knight’s BUTTERFLY TATTOO—what an extraordinary book; onto the keeper shelf it goes—and I’m re-reading Marion Zimmer Bradley’s “The Mists of Avalon” because several people at the Ruby Slippered Sisterhood blog were talking about it recently. Non-fiction-wise, I’m reading Jaron Lanier’s “You Are Not a Gadget,” a treatise about the influence of gadgets and technology in our culture, and in our everyday lives. For research, I’m dug deep into the hacker and cracker subculture. The heroine of my third book is a reformed computer hacker whose former colleagues try to entice her back into the life—with some devastating consequences.


4.      Are you working on another book? Can you tell us anything about it?
TH: I just typed THE END on the second book of the Underbelly Chronicles series, CHASE ME, which teams up Valkyrie archaeologist Lorin Schlessinger with by-the-book werewolf geologist Gabe Lupinsky as they excavate the site where Lorin suspects their ancestors’ spaceship crashed. CHASE ME is scheduled for a March 2012 release. As I mentioned above, I’m starting to do some research and character development work for TEMPT ME, the third book in the series.
5.      Is there anything about your characters, Lukas and Scarlett, that only you know? (That’s not discussed in the book)
TH: Yes, of course — but I can’t say much because Lukas and Scarlett are continuing characters in the series! Lukas, in particular, plays a key role in future books because of his roles running Sebastiani Security, and being the risk assessor and Security/Technology Chair for the Underworld Council.
Okay, okay. I’ll let a couple of personal things slip. Edgy rock star Scarlett Fontaine harbors a guilty appreciation for the music of …shh!...Weird Al Yankovic. As for Lukas, he’s growing his hair out again, at Scarlett’s request.
Thanks so much for visiting with us today.  I have to say the cover for Taste Me is very eye-catching and hot!! 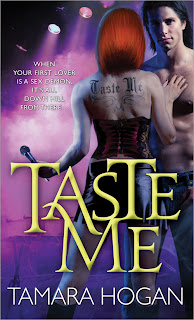 TASTE ME BY TAMARA HOGAN – IN STORES MARCH 2011
Hot, sexy urban fantasy romance by a new author with talent to burn…
He Wants Her So Badly He Can Taste It…
Ever since their tempestuous fling years ago, incubus Lukas Sebastiani has known that siren Scarlett Fontaine was meant to be his. But when you’re a sex demon with an insatiable desire, relationships are way more than complicated…
Her Siren Songs Bring Men to Their Knees…
Rock star Scarlett Fontaine desperately needs a break after a grueling tour. But with murder and mayhem surrounding her band, and the one man she never thought to see again put to the task of protecting her, life is going to be anything but peaceful…
Every encounter between them creates more turmoil—and heat—until Scarlett pushes Lukas to the boiling point, and unleashes forces that go way beyond anything she can hope to control…
ABOUT THE AUTHOR 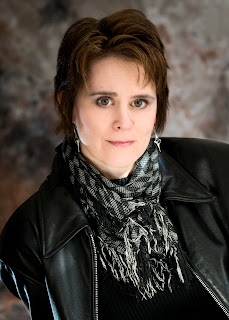 Tamara Hogan loathes cold and snow, but nonetheless lives in the Minneapolis exurbs with her partner Mark and two naughty cats.  When she’s not telecommuting as a quality and process engineer for a global networking company, she writes urban fantasy romance with a sci-fi twist. Taste Me was a 2009 Daphne Paranormal Winner and Golden Heart paranormal finalist under the title Underbelly. For more information, please visit http://www.tamarahogan.com/.
Today, two randomly selected commenters will receive a free copy of TASTE ME from Sourcebooks Casablanca! (U.S. and Canada only, please.) Comment at or before 11:59:59 p.m. to have a chance to win!
*Remember to include your email
Posted by Minding Spot at 9:00 AM