Another Kind of Dead by Kelly Meding 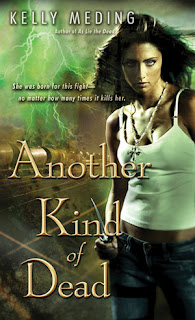 Evangeline 'Evy' Stone just died. She's had many attempts on her life and also died and came back in a different body. The last attempt has everyone believing she died for real, but she didn't. Only a handful of people know Evy is still alive, and she is laying low and out of sight.

Her partner and lover Wyatt is concerned for Evy. He loves her too much to see her die or be harmed. But when an evil scientist, Walter Thackery, decides he needs Evy for his ultimate, she cannot hide forever. Evy has supernatural abilities and speed healing, and Walter desires her alive, as he needs her blood for the cure he is developing to stop vampirism.

The Triad, a group of supernatural hunters that Evy used to work for, believe her to be a traitor. They've recently raided Thackery's lab and removed various monsters and creatures, but failed to capture Thackery. The heat is on now that they are after Thackery, he is after Evy and the action is non-stop.

Wyatt and Evy have a strong relationship, even though their love is still new and fragile. However, they make a marvelous team, complementing one another perfectly. Thackery is a nasty villain who really gives Evy a run for her life. Urban fantasy readers will enjoy the fantastic world-building and complex characters. ANOTHER KIND OF DEAD is the third book in this series, so make sure you pick up the first two, AS LIE THE DEAD and THREE DAYS TO DEAD.