Carry Yourself Back To Me by Deborah Reed 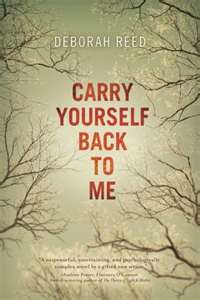 Annie Walsh is a heartbroken singer/songwriter who just turned forty. The love of her life, Owen, left her for a younger woman months ago and the coup de grace kick in the gut was the fact that her brother Calder was covering up for him. Now, months later, Calder pays Annie a visit to let her know he has finally found true love, but she's married. Annie wants nothing to do with Calder and wants to be left alone with her heartache and her old dog, Detour.


Owen is married and expecting a baby. He misses Annie and knows he made a mistake but there's no going back now. When he reads in the paper that Calder is arrested for murder, he is shocked. Calder supposedly beat to death the husband of the woman he was seeing. Calder has Tourettes, the disease that gives a person tics, and it will make the defense's job a lot easier.

Owen can't stand being away and wants to help, so he takes off for the jail that Calder is at. Unfortunately, he needs an appointment so he finds himself at Annie's house. At first, Annie wants an explanation why he left, but the more he tries to explain himself, the deeper a hole he digs himself.

Will Annie finally find peace and love? Will Owen get his act together and will the evidence point to another murderer or will Calder pay the price?

Romance, intrigue, heart-warming and tragic, Carry Yourself Back to Me is a complex and stellar novel with many depths. Flashing from present to past, the story is revealed in increments that enlighten the reader as the tale unfolds. The character development is fantastic, the plot tight and the pace absolutely perfect. Deborah Reed's written voice is profound and definitely can be heard. Highly recommend!