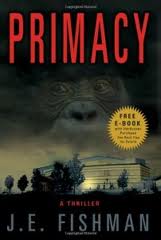 Liane Vinson is a veterinary technician in Pentalon, a big animal testing laboratory.  After two years, she has been promoted to the primate lab.  A pair of bonobo twins captures her interest, Bea and Isaac.  They begin to mimic Liane and speak who at first is unclear what they are speaking but soon realizes it is not only their own form of dialect but is decipherable.

When testing is done on the twins, Liane knows that they are on the verge of a scientific breakthrough.  But when one of the twins undergoes surgery, Liane questions her own boundaries and decides to escape with Bea and return her to Africa.
Her journey is tumultuous.  While worrying about her mother, who desperately needs a kidney, to her new love interest, veterinarian Mickey Ferrone, Liane's life suddenly got rocky.  Being chased by Pentalon security, the CEA of Pentalon, agents of the U.S. government, as well as Folks Against Lab Testing steers Liane and Mickey toward her old lover Corey, an eco-fanatic.
Spanning several continents, a vast array of eccentric and versatile characters and an important moral dilemma at the heart, Primacy is a heart-thumping scientific thriller.  We know there are animal research labs, but what really goes on behind those closed doors?  If it's anything like depicted in Primacy, it will haunt you.  But what if it saved someone's life? There are many questions brought up in Primacy and much food for thought.  Bea will capture your heart, and the pace is quick and the writing keen.  Highly recommend!
ABOUT THE AUTHOR
J. E. Fishman is the author of a new thriller, Primacy, which explores the significant themes of animal rights, the plight of endangered bonobos, and the welfare of animals in research labs.
Fishman’s literary background includes serving five years as a book editor at Doubleday, where he edited the works of NFL superstars Jim Kelly and Ronnie Lott. He founded The Bedford Book Works Literary Agency (later sold to Dystel & Goderich Literary Management), where he represented dozens of writers and personalities, including Starbucks CEO Howard Schultz and Kweisi Mfume, then head of the NAACP.  He was founder and CEO of subrights.com, which closed its doors in the dot-com crash. Early in his career, Fishman served as an associate editor at U.S. Business Press.  He has also ghost written and edited a number of books.
He co-authored two non-fiction books, All I Need to Know I Learned From My Horse (Doubleday) and Life is a Series of Presentations (Simon & Schuster).
He published a mystery novel through online serialization, Cadaver Blues, on The Nervous Breakdown, a literary Website where he now contributes a weekly column.
Fishman, 49, a lifelong nature supporter, is a former trustee of the Eastern New York Chapter of The Nature Conservancy and the North Salem Open Land Foundation.
For more information, please consult www.verbitrage.com.
GIVEAWAY
One lucky reader will win their own copy of Primacy!
MANDATORY ENTRY
Leave a comment with your email
BONUS ENTRIES
Tweet this giveaway - leave link
Follow J.E. Fisherman on Twitter
USA Only.  Contest ends October 4th.  Winner has 48 hours to respond to email or a new winner will be selected.  Prize shipped direct from sponsor.