Before She Dies by Mary Burton Review & Giveaway 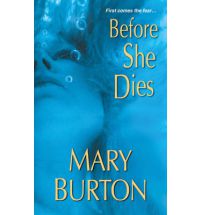 Charlotte Wellington has spent years trying to make something of herself.  Growing up in a carnival, when her sister drowned, she took off on her own.  Now, a defense attorney, she has created a very good life for herself and prefers to leave the past in the past.

When women are found murdered with the word witch tattooed into their foreheads, she doesn't think much of it.  Her sometime lover, Detective Daniel Rokov has the lead on the investigation and is stumped on who the killer is.  He is determined to find him though, and when the carnival comes to town, he takes a closer look at its owner, Grady.

Daniel also realizes that Charlotte is hiding something and he is determined to find out what it is, as well as take their relationship to the next level.  When Charlotte is seen with a young teenage girl, he really wants to know more.  Her name is Sooner, and she is the daughter of Charlotte's deceased sister.  Sooner runs the Madame Divine tent at the carnival, and being a seer she is soon to make the short list for the crazy killer running amok among the city.  But can Daniel figure out the clues to whom is killing the women before he takes another life?

Before She Dies is a thrilling romantic suspense that will captivate the reader, as best-selling author Mary Burton knows how to write. From wonderful character development, along with the return of characters from previous novels, to a twisted and chilling plot, Before She Dies will keep you on the edge of your seat.  I couldn't read it fast enough, I was so caught up in their world.  Definitely pick this one up!

FILL OUT THE RAFFLECOPTER WIDGET TO ENTER
a Rafflecopter giveaway
Posted by Minding Spot at 11:00 PM