Wing Slayer Hunter, Ram Virtos, must find his soul mirror witch and convince her to mate with him before his Thunderbird tattoo kills him. But while that witch might be able to save Ram’s life, it is the mysterious Ginny Stone who inflames his passion. Ginny has been deeply fascinated by Ram for months, but dared not act on it or she’d be torn from her mortal life on earth and thrust into her dreaded destiny as a half-breed angel. But when her beloved brother’s soul is at stake, she must do the one thing she both fears and desires… Take Ram to her bed. 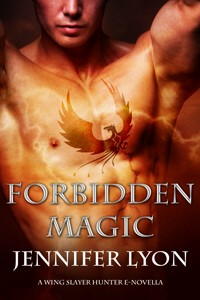 I've read one or two of the Wing Slayer books, but to be honest, I haven't followed the whole series.  After reading Forbidden Magic, I learned that the series had been discontinued, but Ms. Lyon decided to self-publish and continue the series.  I'm so glad she did.

With complex characters and a strong plot, this novella reads like a full-length novel.  Not in page count, but it has all of the correct elements to leave the reader satisfied and entertained.  A good book should take you to another place, and that is just what Forbidden Magic does.  What a problem Ram has - wanting one, but needing another.  How do you choose?

Filled with complex and likable (yeah Ram is hot!) characters, compelling and emotionally invested situations and five star writing, Forbidden Magic is a fantastic read! I can't wait to go back and catch up on this series! 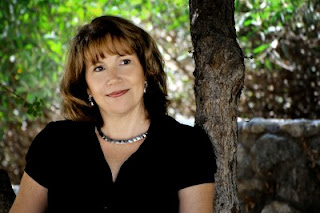 Jennifer Lyon grew up under the shadow of the Matterhorn at Disneyland in Anaheim, California. She attended Walt Disney elementary school and her very first playmate was her beloved dog, Duke, who was cast in the role of hero in all their adventures.
Clearly Jen was born to daydream. But it took her years to figure out how to turn her imagination into a career as an author. After marrying and becoming a full time mom to three sons, Jen launched her career with the award winning Samantha Shaw Mystery Series and other romantic mysteries under the name Jennifer Apodaca. Later, she took the name Jennifer Lyon, combined her love of witches, alpha males and sizzling romance into another award winning series, the Wing Slayer Hunters.
For more information on Jen or her books, please visit her website www.jenniferlyonbooks.com
There are only ten blogs on this tour - make sure to stop at each one for their own take!!

One lucky reader will win a signed copy of Soul Magic by Jennifer Lyon! 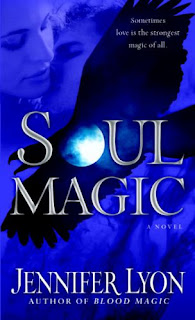 USA Only.  Winner has 48 hours to respond to email or a new winner will be selected.  Prize shipped direct from sponsor.  I received a copy of the book from Innovative Book Tours in exchange for an honest review.