First Do No Evil (Blood Secrets, #1) by Carey Baldwin

From Goodreads - There’s a killer lurking in Dr. Skylar Novak’s family tree: the gene for breast cancer. That's why her brilliant brother invented the Bella vaccine. But even if the miracle drug protects her from the cancer that took her mother's life, it can't save Sky from the flesh and bone evil stalking her in secret.
When the killer strikes, detective Daniel Benson finds himself in the wrong place at the right time. The bold detective manages to save Sky's life…just in time for her to return the favor. Survival leads to seduction, and Danny risks everything—his career, even his life, to keep Sky safe. But will the buried sins they uncover cost him her heart? 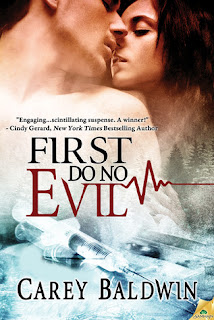 I enjoy thrilling suspense books and if you toss in some romance, that's a-okay by me.  First Do No Evil by Carey Baldwin is a gripping medical thriller that really surprised me.  By the cover, I thought this book would be more romance then suspense, but she blends them perfectly, tossing in her own medical knowledge to really bring believability to the plot.


Sky's life has been filled with tragedy.  From her mother dying from breast cancer, her father murdered in a robbery to her fiance being killed in a diner.  It's in this diner that Danny is introduced. He's a detective and a widower raising a teenage daughter.


It seems to coincidental that those close to Sky keep dying to Danny and he begins to investigate further, against the behest of his superiors and the Mayor.  The closer he gets to the truth and to Sky, the more her life is endangered.  He's falling for her fast, and she him, but can their love survive the evil surrounding them? Sky is afraid to give her heart to Danny; everyone she loves dies.

Even with the killer being known to the reader early on, it doesn't detract from the storyline.  It only adds to it with Baldwin's clever and ambitious writing.  The characters are so well developed, they just leap off of the page, will real problems and emotions that will keep you riveted.  The action is so detailed that I had chills running up my arms, with my heart-thumping like crazy, riding the adrenaline roller coaster, along with the characters.  A debut novel by this author that reads like it's written by a veteran, I definitely can't wait to read the next in this exciting series!


*I recieved a copy of this book in exchange for an honest review.