From Amazon - The Salt God's Daughter by Ilie Ruby is the story of a loss of innocence as told by Ruthie and Naida, a mother and daughter who are forever changed by violence, by family mysteries, by towering acts of love. In an oceanic wilderness where identity is as changeable as the ocean, they face the rites of passage necessary to endure and find in themselves a strength and connection that survive the ages. Theirs is a story that brings to light the primal divinity of the isolated, the marginalized and of those bonded by blood and myth as seen through a lens of transcendent beauty. A stunning, raw, evolutionary tale about the ties that bind, and how far we'll go to save the ones we love. 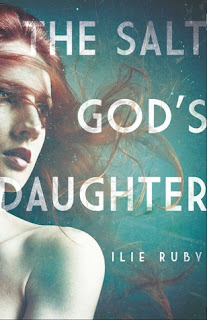 The Salt God's Daughter spans three generations, Diana (Ruthie's mother), Ruthie and Naida (Ruthie's daughter.)  What I found to be concurrent through-out the book was the bonds of mother and daughter, how it strengthens and bends, but it doesn't break.


Also as a recurring theme is the legend of the selkies - creatures who can shed their seal-like skins when they are on land.  While their lives are at times despairing, other times there is hope as well as laughter and tears.  I wanted to cry sometimes with them and at other times, I wanted to smack some sense into them.  I won't say who, what or where because I don't want any spoilers.  I will say that although, at times, the descriptions and prose can be a bit wordy, it's worth it to get to the heart of the story. These women went through some hard times, but they are strong and it shines through in their character.  Ruby has written a phenomenal piece of fiction that is sure to find a niche on a vast array of bookshelves.

About Ilie Ruby: In addition to this book, Ilie Ruby is the author of the critically-acclaimed novel, The Language of Trees, which debuted in 2010 and was selected as a Target Emerging Author’s Pick and a First Magazine for Women Reader’s Choice, and for which complex Chinese rights were sold.