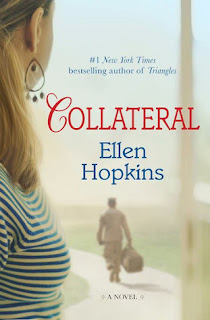 Many women fantasize about men in uniforms.  The image of fit, well-mannered men selflessly serving their country is a powerful one.  However, what is it really like to be involved with a soldier—one who may leave you at any time for service in a war torn part of the world, with no clear idea when or if he will return?  Collateral, the new novel by Ellen Hopkins, delves into the perils of loving a soldier—not just the romance of it, but the difficulties and stress that come with the love.
Ashley is a twenty-something college student, trying to study Chaucer, when she meets Cole, a young marine.  Though Ashley’s family is squarely anti-war and anti-soldier, there is something compelling about Cole.  The two begin a romance, punctuated by Cole’s duty assignments in war zones and training on different bases.
Collateral is written in free verse poetry mostly from Ashley’s point of view.  Though we occasionally get a poem from Cole, it is Ashley who takes us through the journey of what it is like to be part of the “collateral” of a soldier’s life.  Cole tells Ashley, “You are my collateral.  My reason to return, no matter what”.  While Cole buries himself in military life, Ashley seems to be in a holding pattern, waiting for Cole to return.  Their relationship is not without struggles, but they clearly have a physical connection.  I learned quite a bit by reading Ashley’s poems.  I has never considered all the difficulties of being involved with a member of the military, and I think that Hopkins is to be commended for making me understand the stress and strain that deployment puts on a relationship.
As the novel progresses, the relationship between Ashley and Cole becomes more complicated and strained.  They are young, in love, and trying to live within the construct of a structured military life that neither is really prepared for.
Ashley’s best friend, Darian, is married to a soldier.  She continually urges Ashley not to marry, that the challenges of being a military wife are too much.  Darian distracts herself from the stress by taking lovers, and eventually settles on one.  Just when she is about to leave her husband behind, a tragedy keeps her trapped in the marriage she is desperate to escape.
I really enjoyed the format and theme of this book.  Like I said before, I had never really considered what happens to the families of soldiers.  The poems that made up the narrative were interesting and compelling.  I got to thinking that the book had to be written this way.  I could not imagine it working as well as a straight narrative.  The reader would not get such a clear picture of the  relationship between Cole and Ashley.
I really did not like the ending, though.  In the end, it seemed to reinforce the negative picture that many people have of soldiers.  It certainly reinforced Ashley’s parents disapproval of Cole.  (I am not going to give away the ending.)  I thought it was a cheap way to end the book.  In the end, Cole became the stereotype that all of the poems that he had written proclaimed that he wasn't.
In short, I enjoyed Collateral and Ashley took me deep into what it means to love a soldier.  I just wish that Cole could have been a more nuanced character that I did not come to see as one-dimensional.  Yes, he is a soldier, but he should have been able to be presented more as a fully rounded human being as well.
*I received a copy of this book in exchange for an honest review.   Regina