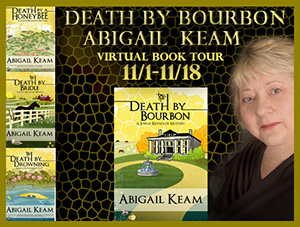 Charming and handsome Addison DeWitt takes a sip of bourbon at an engagement party and falls into a fit a few minutes later. Josiah thinks it was murder, but no one believes her except for her friends, Lady Elsmere and Meriah Caldwell, the famous mystery writer. The three of them try to outsmart the suspected murderer, but the killer is always three steps ahead of them in this fast-paced, witty and fun who-dun-it! Death By Bourbon is the fourth installment in the award-winning Josiah Reynolds mystery series. Josiah Reynolds is a retired art professor who keeps honeybees as a hobby. She lives in an iconic house called the Butterfly designed by her now deceased husband. An amateur sleuth, Josiah lives in the glamorous world of Thoroughbreds, oak-cured bourbon and antebellum mansions, struggling to uncover the truth in the Kentucky Bluegrass, which keeps its secrets well.

MY THOUGHTS
Death by Bourbon is the fourth book in the Josiah Reynolds mysteries.  That said, I haven't read the first three books in the series, so I went in blind.  Sometimes it works out and sometimes it doesn't.  This time, unfortunately, didn't.  I was doing ok at first, but then all of these other characters started showing up and I didn't have a clue of who they were, where they came from and what they wanted.  Did it take anything away from the plot? No, not really.  It just took away some of my investment.

However, I will say that the writing is fast-paced and the dialogue is witty, clever and essential to helping to figure out who killed Addison.  I enjoy cozy mysteries and found the characters in Death by Bourbon to be engaging and likable.  I will go back and read the first three books in the series, and then re-read this one.  I'm sure it will be even better! But as for now, it's good.  Intriguing, solid and fun.

The dark-clad figure pulled out the wires to the security box.  Deftly, the intruder cut the correct wire to silence the alarm.  Then going around to the southwest part of the huge mansion built in 1832, the thief skillfully unlocked the side porch door and stepped into the library.
Hearing a dog growling in the hallway, the thief threw a piece of meat towards the hall and stood patiently until the dog ate the meat and a moment later groggily stumbled, falling asleep.  It would sleep for several hours from the drug administered to the meat but would wake up unharmed.
The thief looked for a wall safe behind paintings and even tapped on the walnut paneling.  Finding nothing, the dark figure concentrated on the desk, taking pictures of any checks, bank statements, investments that could be found.  Then the thief copied the computer files onto a flash drive.
Several drawers were locked but it took the thief only seconds to break them open.  Finding a handgun, the thief put it into a black bag, also several award silver trophies from a bookshelf.
Silently investigating the house, the thief went towards the front parlor.  There the thief moved to the Duveneck painting hanging over the mantel.  With quiet efficiency, the thief broke the frame and cut the painting from its stretcher.  Rolled, the painting was placed in a tube the thief had brought.
Both the painting and the bag with the silver were lowered out a window.
Now unencumbered, the thief studied the massive staircase.  Making a calculated decision, the thief leaped up the stairs, taking three steps at a time.  Hiding in the shadows of the hallway, the thief saw that most of the upstairs doors were open.
Seeing what looked like a nightlight dimly peeping into the hallway, the thief surmised that it came from a child’s room and headed for it.
The thief was right.
A boy, wearing Spider-Man pajamas, lay asleep in a bed designed to look like a racecar.  The thief studied the child’s features.  Suddenly the thief’s hand shot out, but only to pull the blanket over the little boy.
The sleek, black figure pulled away and went to look for the mother’s room.  Going next door, the thief discovered the mother of the boy asleep in her king size bed.  She was wearing shorts and a sports bra.  Like the boy, she had thrown off her blanket and lay sprawled across the bed, lightly snoring.  A purse hung off a chair.
The thief claimed it and then went directly to a jewelry box sitting on the vanity, and took it downstairs.  Pouring the contents of both the purse and the box onto the couch, the thief picked up several pieces of jewelry and a wallet, then fled out the side door.  The thief was careful to lock it again.
Picking up the bag and tube, the thief absconded into the woods and to a country road where a black sedan was waiting.  Flinging the goods in the trunk, the thief turned off the night goggles, throwing them on top of the sack.  Starting with gloves, the thief took off the dark jumpsuit, revealing a casual fall outfit.  The dark clothing was stuffed into a garbage bag and securely tied.  The thief let long dark hair escape from a confining cap and got in the car, quietly shutting the door.
The driver looked at his boss.  “Twenty-five minutes.  What took you so long?”
“The painting was more trouble than I anticipated,” lied Asa.  “Let’s move on down the road.”
The car sped down Old Frankfort Pike with its lights off until it cut over the road to Midway.
Asa leaned back in the seat, smiling to herself.   Ellen was going to be distracted as she was going to spend a great deal of time cleaning up the identity theft which was going to start occurring tonight.  As for the jewelry and silver, Asa would stash it in her New York apartment’s safe until she could have something made from the stolen loot.  The credit cards would be given to her driver.
Forty-five minutes later, Asa boarded a Piper from a private airstrip in Scott County and flew to New York.
The employee made several outlandish purchases from Ellen’s laptop with her credit cards and later dropped the cards on the floor of a disreputable drinking establishment in Covington.
Josiah Reynolds slept fitfully in her bed, never knowing that her daughter had been in Kentucky. 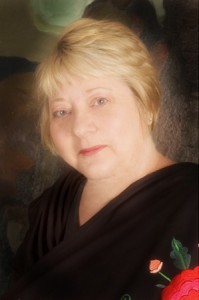 Abigail Keam is an award-winning author who writes the Josiah Reynolds mystery series about a beekeeper turned sleuth. Death By A HoneyBee won the 2010 Gold Medal Award for Women’s Lit from Reader’s Favorite and was a Finalist of the USA BOOK NEWS-Best Books of 2011.  Death By Drowning won the 2011 Gold Medal Award for Best Mystery Sleuth and also was placed on the USA BOOK NEWS-Best Books of 2011. Ms. Keam is also an award-winning beekeeper who lives on the Kentucky River in a metal house with her husband and various critters.