The final installment in Larissa Ione's best selling series, Rogue Rider, releases November 20th! To celebrate, we are giving away the whole series, including Rogue Rider! All four books pictured above!

The Four Horsemen of the Apocalypse.

Born of a match between good and evil, four siblings stand between hell's minions and everything they want to destroy. They are the Lords of Deliverance, and they have the power to ward off Doomsday . . . or let it ride . . . 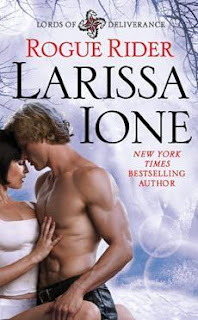 Jillian Cardiff came to this remote mountain town to forget the demon attack that almost killed her. Instead, she rescues-and falls for-a gorgeous stranger who has no memory of anything other than his name. Handsome, charming, and protective, Reseph seems like the kind of man whom Jillian can trust. But with hints of a troubling history of his own, he's also the kind of man who can be very dangerous . . .

Reseph may not know why he mysteriously appeared in Jillian's life, but he knows he wants to stay. Yet when Jillian's neighbors are killed, and demon hunters arrive on the scene, Reseph fears that he's putting Jillian in danger. And once it's revealed that Reseph is also Pestilence, the Horseman responsible for ravaging the world, he and Jillian must face the greatest challenge of all: Can they forget the horrors of a chilling past to save the future they both desire?


SHORT EXCERPT
Another burst of rage made his blood sizzle. Nothing would hurt her again. Nothing.
“Reseph?”
He blinked, realized he’d been lost in his own mind like some kind of head case. “Yeah?”
“You were growling.” She was looking at him like she thought he was some kind of head case, too.
“Shit.” He brought one of her hands to his mouth and pressed a kiss to the silky skin. “Sorry. I just feel so damned helpless. I want to kill the thing that attacked you, and I want to protect you from everything else, but what if…” He trailed off, not wanting to voice his darkest fears.
“What if…what?” She hooked one finger under his chin and forced his gaze to hers. “Reseph? Don’t shut down on me. I just shared with you. Your turn.”
Yeah, it wasn’t fair for him to not spill his guts after she just had, but there was a big difference here. What she’d told him had made him feel even more for her, had plucked at every tender, protective gene he had. But what he held inside could only do the opposite to her.
“What if it’s me I have to protect you from?”
“I’m not afraid of you, Reseph.” Her level gaze was unwavering, leaving no doubt that she was serious.
“But you don’t know who I am.”
“I know you’re cocky and funny. You’re protective and sweet. You’re not afraid of hard work. You’re strong, but gentle. You can’t cook worth a shit.”
“I think I’m offended.”
“But you really can’t cook,” she grumbled.
“I was talking about the ‘sweet’ part.”
Her full lips quirked in an impish smile. “Sweet.”
This wasn’t going well, not when she wasn’t taking his concerns seriously. “Jillian, maybe that’s who I am now. But what if we find out I’m a sick bastard. What if—” 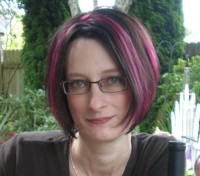 Air Force veteran Larissa Ione traded in a career as a meteorologist to pursue her passion of writing. She now spends her days in pajamas with her computer, strong coffee, and supernatural worlds. She believes in celebrating everything, and would never be caught without a bottle of Champagne chilling in the fridge…just in case. She currently lives in Wisconsin with her U.S. Coast Guard husband, her teenage son, a rescue cat named Vegas, and her very own hellhound, a King Shepherd named Hexe.

GIVEWAY
One lucky reader will win the whole series of the Lord of Deliverance!

*Fill out the Raffelcopter below
*USA only
*Contest ends November 23, 2012

a Rafflecopter giveaway
Posted by Minding Spot at 6:57 PM