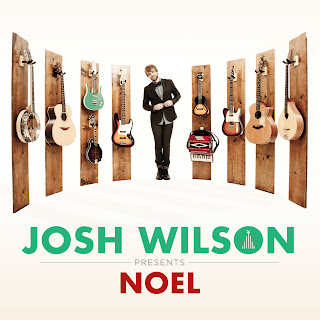 The CD is by Josh Wilson and it's titled Noel.  Yes, I'm sure you're thinking that it's another Christmas CD and they all sound the same.  Honestly, some of them do, but this one has just the perfect niche.  It starts off with acoustics, and then moves in to beautiful voice.  It's upbeat enough that it won't be lulling Gramma to sleep over the ham but it's also not so fast and busy that you'll find yourself wanting to rush around either.  In short, this is the perfect background music for your Christmas get-together.  Everyone will enjoy it without it being overpowering.  I can't see myself baking cookies to it, to be honest.  We used it as background music while putting up the trees.  We all took turns randomly singing along, but it faded into the background as needed.

Rising singer/songwriter Josh Wilson releases his first full length Christmas album, Noel, this October as a follow up to last year s hugely successful Christmas tour (Noel: A Unique Christmas Experience) and the #1 Christmas single of 2011, Jesus is Alive . Known for being one of the top songwriters and multi-instrumentalists in the industry, Wilson has been hailed as the future of Christian pop by media and his albums are regularly named to Year-End Top Ten Album lists. He has released numerous No. 1 hits including Savior Please and the powerful track Before the Morning, which landed the No. 4 spot on Billboard s Year-End Christian Songs chart.


*I received a copy of this cd in exchange for an honest review.  Shawn

*Fill out the Rafflecopter below to enter
*USA & Canada Only
*Contest ends November 14, 2012

a Rafflecopter giveaway
Posted by Minding Spot at 1:29 PM