Twas the Night After Christmas by Sabrina Jeffries 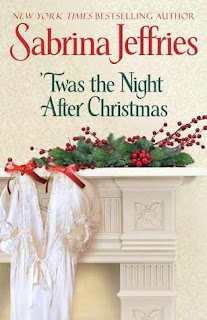 As much as I complain about stores piping in Christmas music the day after Halloween, my thoughts naturally turn to the holidays this time of year.  I find myself wanting to drink eggnog milkshakes, listen to Christmas music, and especially read novels centering around the holidays.  (After all, if I don’t read them now, I am going to have to wait until next year!)  ‘Twas the Night After Christmas by Sabrina Jeffries came at just the right time.  It is a heartwarming story about finding a family, forgiveness, and love.
Pierce Waverly is a wimpy little boy.  His father, unimpressed by his son’s asthma and general temperament, sends him off to boarding school.  While Pierce clearly loves his mother and wants to be with her during school holidays, he is shipped off to a cousin’s house instead. His mother only sends for him when he is grown—and his father is dead.
When Pierce reluctantly returns home, he greets his mother, the Dowager Countess of Devonmont, with heaping piles of resentment and bitterness for her callous abandonment of him and her lack of concern for his welfare.  Camilla Stuart, who has been hired as the Countess’ companion takes it upon herself to reunite the family and to find a way to make peace between the two of them.
Of course, Pierce is not amenable to this plan at all, so he makes a compromise.  For every night that Camilla spends with him, he will spend another day with his mother.  You can guess where this relationship leads.
The majority of the novel is concerned with Pierce’s mother and her withholding of the true reason that she never sent for her son. Through at least 200 pages, she steadfastly refuses to admit the real reason.  It is only after Pierce hires a private detective that the truth comes out.  By the time it was revealed, I didn't care very much any more.  I spent all of those pages racking my brain the reason for her behavior, and when it was finally explained, I was not surprised and I could not understand why she had not told him sooner.  This revelation comprised the majority of the plot of the novel, so once my interest in this “mystery” started to wane, so did my excitement about the rest of the book.
The characters were quite well done.  I felt for Pierce and his feelings of anger and abandonment.  Camilla was gutsy, and I like that she has a child.  Jasper, her son, stole many of the scenes that he was in and his fervor for “’Twas the Night Before Christmas” was a sweet touch. The Dowager Countess was well-drawn, and I was happy she got a little romance thrown in as well.
Overall, while I enjoyed the theme of forgiveness and I liked the characters that populated this novel, the plot was a bit flat for me.  It was a fun read though, and it got me in the holiday spirit.
*I received a copy of this book in exchange for an honest review.