Whispers at Moonrise by C.C. Hunter 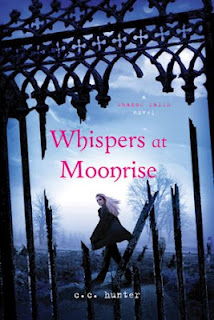 Kylie Galen is at a camp for supernatural teens, Shadow Falls. There, she's made friends with witch Miranda, vampire Della and has feelings for fae Derek and werewolf Lucas. The problem for Kylie has been that she doesn't know what she is. That is, until the ghost of her father pops up and tells her that she is a chameleon. Kylie doesn't want to be a supernatural lizard and no one else seems to have heard of the supernatural species. Kylie just knows she is tired of sticking out like a sore thumb.

Not to mention the problem she is having adjusting to her mom going through a divorce and already dating. Then there is the fact that Derek still has feelings for her, but Kylie is currently dating Lucas. She thinks she may be falling in love with Lucas, but his Pack disapproves. Lucas should be with his own kind, not someone like Kylie. Then there is the whole problem of the ghosts. Kylie sees them and they talk to her and she tries to reciprocate. The problem is that they usually want something.

The next time a ghost appears before Kylie though, she knows it is different because the ghost is of someone Kylie knows, and she isn't dead. Kylie gets the help of Derek and Burnett, a vampire who helps run the place with Holiday, to figure out who the ghost really is and how they can help them cross over. But it will take more than the three of them to curb someone who is adamant about adding to his morbid collection.

With a love triangle, a supernatural society, a mystery to solve and great characters, WHISPERS AT MOONRISE is a great addition to the series! Not only does Kylie have boy problems, but so does Miranda, Della and Holiday. With the camp about to become a full-time school, there are new teachers and students arriving, so the cast of characters gets broader, which really adds to the mystery. The ending is satisfying, but it definitely left a lot of loose ends, which I am hoping will be tied up in the next book, CHOSEN AT NIGHTFALL, which will be released in April, 2013. But while you are waiting, I urge you to pick up the rest of the series, BORN AT MIDNIGHT, AWAKE AT DAWN and TAKEN AT DUSK.


*I received a copy of this book in exchange for an honest review from Romance Junkies.
Posted by Minding Spot at 12:38 PM