"We came to stop a war before it came to Cercia. And it seems the war has come to us."

Responsibility and patriotism spur Cercia's new leader, Quentin, to protect his beloved country at all costs and he assigns Asahel and Felix to serve as ambassadors and secret agents to Anjdur. Their journey quickly turns awry and Asahel and Felix barely escape a devastating shipwreck, walk a tightrope of political tension, and rescue an empress before they learn they must face an enemy closer to them than they thought.

Will they be able to uncover an assassin's plot before it's too late? Will Asahel be able to unearth a secret that is vital to their mission? Will Cercia survive its own revolution? In The Jealousy Glass, Perkins boldly continues a series of unforgettable characters and events that will leave you begging for more. 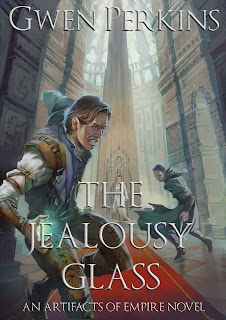 The Jealousy Glass is the second novel in the Artifacts of Empire series.  I have not read the first book, the Universal Mirror, but The Jealously Glass can stand on it's own.  However, I felt that I would have known and understand the characters a bit more if I had read the first one.  The backstory was a bit weak in this installment.

However, the writing is really good and the world-building was intriguing.  The characters were likable and the politics weren't too deep that this reader couldn't follow along and understand what was going on.  There is romance, magic, politics, action and adventure in this great book and fans will be clamoring for the next one after they read the last page.

Gwen Perkins has always regarded the deep rainforest of the Olympic Peninsula as the one place that she feels most at home. Gwen grew up in small towns across the Pacific Northwest, going to slug races and strawberry festivals when she wasn't scribbling on any scrap of paper she could come by. She boasts the dubious distinction of going to a public school with only eight students, learning Irish sea chanteys from a man who sang with the Clancy Brothers, and catching tadpoles during classes.
Her adult life is generally just about as much fun.
She lives in the City of Destiny (better known as Tacoma, Washington) with her partner, Laura, and their three children, Amaranth, Nynaeve, and Oisín. Her hobbies include wandering beaches, baking pies and lampworking. In between all of this, Gwen has written two novels in the Artifacts of Empire series:The Universal Mirror and The Jealousy Glass.
She is presently at work on The Oracle Bones, the third novel in the Artifacts of Empire series and writing another book in collaboration with Wilson Fabián Saravia.
*I received a copy of this book in exchange for my honest opinion.