Rally 'Round the Corpse by Hy Conrad

It's been two years since her fiancé's death. Amy Abel needs to start over. What better way for a shy, risk-averse woman to start than to sink all her savings into a travel agency specializing in adventure? Her first project is a mystery road rally through the European countryside. At the starting line in Monte Carlo, Amy finds herself attracted to Marcus Alvarez, the most mysterious of her two dozen game-loving clients. But the rally gets off to a rocky start when an eccentric writer, the only person who knows the game's solution, is himself murdered back in New York. Who would kill a harmless mystery geek, and why are weird accidents beginning to happen along the way? To her horror, Amy discovers that this fictional mystery was based on a real, unsolved case, one that Marcus knows too much about. Now she has no choice but to join forces with Fanny, her domineering mother, and solve this on her own, before the killer strikes again. 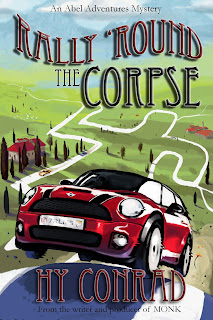 I've never seen an episode of Monk but I know my mom loves it.  If Rally 'Round the Corpse was anywhere near as good as one of her favorite shows, I knew I was in for a treat. The plot is pretty creative.  I've read about the murder mystery parties, but I've never heard of a murder mystery tour.  That's very clever and it certainly led to the appeal.

The story isn't set in just one place as the rally visits different settings, which in turn, causes some of the characters to act in different ways.  Although it started a bit slow, it definitely picked up pace, as well as Amy's character began to open up.  I won't tell you what happens because most of the fun is the journey in getting there.  What I can say is that I look forward to another book by Hy Conrad.  If you enjoy light suspense with vividly drawn characters and superb writing, pick up Rally 'Round the Corpse! 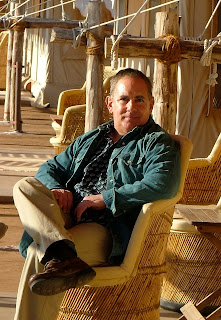 Best known for his work in mysteries, Hy was one of the original writers for the groundbreaking series,Monk.  He worked on the show for all eight seasons, the final two as Co-Executive Producer, and received three Edgar Nominations from the Mystery Writers of America for “Best TV Episode.”
In a related project, Hy was Executive Producer and head writer of Little Monk, a series of short films featuring Adrian Monk as a ten-year-old.  His latest TV work was as writer and Consulting Producer forWhite Collar.
Hy is also the author of hundreds of short stories and ten books of short whodunits, which have been sold around the world in fourteen languages.  Hy’s first full-length comedy/mystery play, Home Exchange, premiered at the Waterfront Playhouse in Key West in May 2012.  And, in a different vein, he recently authored a humor book calledThings Your Dog Doesn’t Want You to Know.
Hy splits his time among Key West, Vermont and New York City.
Author Website: http://www.hyconrad.com/
*I received a copy of this book in exchange for an honest review.