Waiting For Daybreak by Amanda McNeil 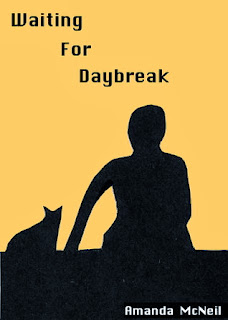 Just like vampires before them, zombies seem to be making inroads into mainstream fiction.  No longer are they just the disgusting undead; they have become (in some cases) funny and endearing.  While the zombies in Amanda MacNeil’s Waiting for Daybreak are definitely of the scary variety, the novel itself is an offbeat testament to the value of life and an affirmation of the quirks we all have.

Frieda is a young woman who is having a rather crappy life. Not only does she have a job that she does not really enjoy, but she also spends most of her time alone—except for the company of her cat, Snuggles.  Her personality disorder, as well as her anxiety and depression, are hard for her to manage.  She self-harms and wishes that she had someone with whom to share her life.

When she finally meets a promising man and goes on a first date with him, she is delighted.  Unfortunately, her insecurities get the better of her and the date is a disaster.  While staying home the next day, trying to rid herself of a hangover, Frieda manages to avoid the contamination that leads the rest of the world to turn into zombies (or “The Afflicted” as she calls them.)

The first half of the novel is really insight into who Frieda is and how she has been able to survive as long as she has.  We learn of her methods to avoid detection, and her plans to get food.  She bonds with her cat, Snuggles, as well.  The kitty provides a much-needed source of companionship.  When Snuggles takes ill, Frieda decides to go to the animal hospital to get her some medicine.  On the way there, after a zombie encounter, Frieda meets Mike, the only human she has seen in the last year.  The last half of the novel is about Frieda’s relationship with Mike and the impact it has on their future survival.

Both a book about monsters, as well as a book about accepting yourself, flaws and all, Waiting for Daybreak surprised the heck out of me.  I did not expect to like it as much as I did.  I found Frieda, with all of her issues, real and vulnerable.  I loved that she was willing to face The Afflicted to get medicine for her cat.  And I loved her journey to strength.

The introduction of Mike in the last half of the book changed the focus a bit, but he moved the plot along.  Is he just with Frieda because she is the last woman on Earth or does he deep down come to love her?  The super twisty ending reveals the truth.

Waiting for Daybreak was just fun.  It is absolutely clear to me that Amanda MacNeil is quite a talented writer.  She has it in her to write an even longer, more fleshed out novel, and I would happily read it.  Waiting for Daybreak does have the occasional syntax and grammar issue (at one point in my Kindle edition, Mike’s name was changed to Mark), but by and large, it is a quite readable, touching, and fun book.   And if the zombies come, I would totally brave them to get medicine for my cat too!


*I received a copy of this book in exchange for an honest review.  Regina
Posted by Minding Spot at 12:30 AM