Pain And Truth: Second book in The Truth Series by Elaine May

Should be read after reading Lies And Truth

As Joshua sees the doctor from earlier begin to step towards him his whole world stops turning and his heart skips too many beats.
Everything seems to happen in slow motion with every step the man in scrubs takes, getting closer to revealing what the men in Joshua's own family, his own uncle and cousin, had done to his beautiful Isla.


After years apart Isla and Joshua were finally reunited in a beautiful night but come morning evil tried to destroy it. Will Isla and Joshua's love with stand the new evil that threatens them? 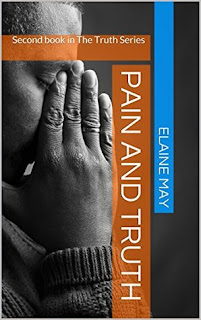 This is the sequel to Lies and Truth.  We begin this book with Isla in the hospital and a search for her cousin/brother and uncle.  The FBI has become involved.  Joshua won't leave her side, not even to take care of the business he's just inherited.  It's a long road to recovery, both physically and mentally.  Will the bad guys ever be caught, though?
My goodness!  I don't remember the last time I was so darn bored with a book!  I was so excited with the first one and anxious to see where the cliff hanger I was given would lead.  Then I began reading this sequel and my spirits plummeted.  Gone is the excitement and flow!  Gone are the characters that I was actually enjoying!  Gone is the story!  I kept reading in the hopes that it would get better but it did not and sadly I cannot get this past hour of time back.
Now, just because this isn't for me, doesn't mean it won't be for you.  Do you like Harlequin romance books?  You know the old-fashioned ones with the super sappy endings?  Then you might enjoy this book because that's what the entire thing is.  It's one freakishly long Harlequin romance ending.  And I swear, if I read the words 'baby girl' one more time, I'd have busted my Kindle with a hammer out of anger!  However, you might be one of those people who enjoy seeing a man constantly calling his lady 'baby girl.'  This isn't all this story is though.  Do you enjoy watching unbelievable recovery stories?  This could be right up your alley!  Just when you think you've heard all the stuff broken, you get to find out more!  Just when you think she couldn't possibly get worse, voila!  Now, this is only the secondary theme to the book, so don't expect it to drag through more than the first three-fourths.  Now, if these things interest you, this could be the book of your dreams.
To be completely honest, this story wasn't an entire loss.  The prologue and the epilogue actually contained work by the writer I had enjoyed in the first book in the series.  There are also a few pages in the book regarding what happens with Isla's cousin/brother and uncle.  These were the tidbits I actually wanted an update on from the first book.  Thankfully, I didn't have any trouble finding this since they stuck out like a sore thumb in between the lurid lovemaking and 'baby girl' phrases.
This is an incredibly unusual book series.  It's as if they're written by entirely different people.  One book is dark and gritty and brings horror close to the front of your brain where you can taste it.  It's entertaining and keeps you pulled in.  The other book is nothing but sappy romance and healing.  It's calm and dull.  Now, you may believe that 'dull' isn't the correct word for a survival story, but this isn't a survival story.  It's more 'Oh she had therapy.'  I feel like someone threw me into the deep end of the pool and then immediately tossed me back into the kiddie pool.

*I received a copy of this book in exchange for an honest review. Shawn
Posted by Minding Spot at 2:27 PM