I Take You by Eliza Kennedy

Lily’s fiancé Will is a brilliant, handsome archaeologist. Lily is sassy, impulsive, fond of a good drink (or five) and has no business getting married. Lily likes Will, but does she love him? Will loves Lily, but does he know her? As the wedding approaches, Lily’s nights—and mornings, and afternoons—of booze, laughter and questionable decisions become a growing reminder that the happiest day of her life might turn out to be her worst mistake yet.

Unapologetically sexy with the ribald humor of Bridesmaids, this joyously provocative debut introduces a self-assured protagonist you won’t soon forget. 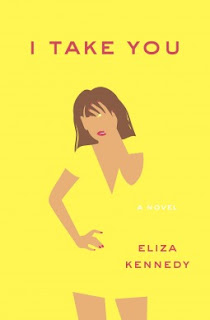 Is it awful to start a review by saying that I hate every character that I met in I Take You by Eliza Kennedy?  If so, consider me awful.  This book is populated by amoral, pompous characters who are impressed by their own cleverness.  Though the book was relatively well written, I cannot say that I liked it.
Lily is an attorney who is getting married in six days.  This does not stop her from flirting and having sex with other people, though.  Nor does it stop her from drinking binges and irresponsible behavior.  She is marrying Will—the complete opposite of her.  He is an archaeologist who quotes Greek philosophers and is a little bit boring.   The wedding is taking place in Key West, Lily’s childhood hometown.
Her mother is there, as is her father.  They are divorced—with her father having been married several times.  Lily’s best friends are there, as is an efficient wedding planner and a long ago boyfriend.  This book is well-populated.  Over-populated, if you ask me.  I could hardly keep the characters straight, and I did not like any of them.  Even the addition of a colorful grandmother did not save this book for me.
Lily is having serious doubts about the wedding and specifically about the viability of monogamy and commitment.  Most of the book is her trying to decide whether or not to call off the wedding.  (Even her parents are telling her that it is a bad idea).  When she meets Will’s mother, who is dead set, against the wedding, Lily decides to prove her wrong.  Drunken antics ensue.
I know this book was not meant to be realistic, and I am not condemning it merely on moral grounds.  My biggest complaint is that it was too impressed with its own cleverness—and as a reader, I kept trying to figure out where that cleverness was coming from.
The ending had a little twist, but it was completely unrealistic.  I Take You, while clearly intending to be a light-hearted beach read, fell amazingly flat for me.  I would not take any of the characters in this book at all.
*I received a copy of this book in exchange for an honest review.  Regina