Diane seems to have the perfect life. She is a wife, a mother, and the owner of Happy People Read and Drink Coffee, a cozy literary cafe in Paris. But when she suddenly loses her beloved husband and daughter in a tragic car accident, the world as she knows it instantly vanishes. Trapped and haunted by her memories, Diane retreats from friends and family, unable and unwilling to move forward.

But one year later, Diane shocks her loved ones and makes the surprising decision to move to a small town on the Irish coast, finally determined to heal and rebuild her life alone—until she meets Edward, the attractive yet taciturn Irish photographer who lives next door. At first abrasive and unwelcoming, Edward initially resents Diane’s intrusion into his life of solitude . . . until he can no longer keep her at arm’s length, and they fall into a surprising and tumultuous romance. But will it last when Diane leaves Ireland, and Edward, for the home she once ran away from in Paris? At once heartbreaking and uplifting, Diane’s story is deeply felt, reminding us that love remembered is love enduring. 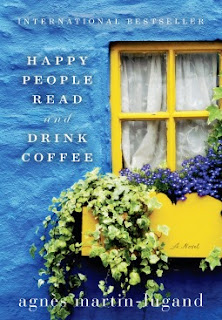 Happy People Read and Drink Coffee by Agnes Martin-Lugand begins like many books that could be labeled “women’s fiction”.  Middle aged and happily married, Diane spends her days running a literary café in Paris.  Happy People Read and Drink Coffee (the name of the café) is where she catches up on the exploits of her best friend, Felix.  When her life is destroyed by a tragic accident that kills her husband and daughter, Diane completely falls apart. Diane’s grief is all consuming and she cannot bear to do much of anything.  She nearly skips the funerals due to her grief.

Diane regrets not taking a trip to Ireland when her husband wanted her to vacation there, so she decides to travel to Mulranny, a small coastal town—alone.  Though her family and friends think that this is a step forward for Diane, she goes to wallow in more grief without her family’s interference.

In Ireland, she interacts with the friendly locals and enjoys visits with a local dog, Postman Pat.  Unfortunately, the dog belongs to Edward, a relative of her landlord.  He is beyond irascible.  He is unexplainably cruel to Diane.  I hated him after his first scene, and though his “grumpy” façade is later explained, I could not get over what a horrible jerk he was.  Unfortunately, his cruelty is never fully explained and I got the impression that this was a problem with the translation of this book from French to English.  His behavior was over-the-top horrible, and when the inevitable romance developed between Diane and him, I was not at all convinced that it was good for either one of them.

The ending was unbelievable, and I found it to be unsatisfying.  As an examination of grief, this book could be called mildly poignant.  As an example of women’s fiction, it was a disappointment.  Even at its short 200 pages, I found it tedious and flat.

*I received a copy of this book in exchange for an honest review. Regina
Posted by Minding Spot at 12:00 PM