In this charming, modern retelling of the classic Audrey Hepburn film Roman Holiday, a royal prince tries to escape his hectic and rigid life and ends up leading a young graduate student on a chase through the Eternal City.

Julia Costa is too busy trying to complete her PhD while also holding down a full-time job as a private tour guide in Rome to keep up with celebrity gossip. So when she crosses paths with a real, actual prince, she mistakes him for a client and takes him on a daylong tour of the city.

Intrigued by the idea of spending time with someone who obviously has no idea who he is, and delighted at the prospect of a day free of royal obligations, Niccolo La Torre, Crown Prince of Lazaretto, acts on impulse and assumes the role of Julia’s client. He swears to himself that he’ll return to his royal duties after only half a day…but he’s having the time of his life.

Until Julia presents him with the bill. Since he snuck out of the hotel without so much as a dime, he tries to escape, only to discover that she won’t let him out of her sight until he can pay her back. She’s determined to get her money…and perhaps more from the handsome stranger she’s fallen for. 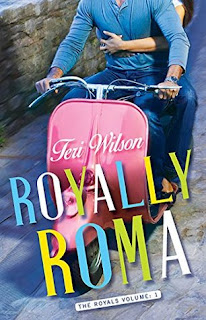 With a nod toward the classic film, Roman Holiday, Royally Roma by Teri Wilson is a breezy, light-hearted romp through the streets of Rome and other Italian locales.  This sweet confection is the perfect escapist novel.

Julia takes her job as a tour guide seriously.  A graduate student with a day job taking wide-eyed tourists around Rome, Julia is trying to escape the shadow of a family scandal that nearly ruined her life.  Add a disastrous relationship, and Julia is just trying to make do in the beautiful city she loves.  When a new tour goes terribly wrong, she is determined to stand up for herself and get the compensation she deserves.

Niccolo La Torre, Crown Prince of Lazaretto, is tired of being the responsible prince.  While his brother recklessly parties and shames the family name as a playboy prince, Niccolo is left to uphold royal responsibilities and please his grandfather, the King.  Niccolo, faced with a schedule as daunting as it is boring, decides that he needs one free day where no one knows who he is.  When he sees Julia in a restaurant, Niccolo decides to pose as Julia’s client.  Now, if only he can make it through the crowded streets without being recognized or found by his princely security detail, Niccolo might just have time to fall in love.

If you can suspend your disbelief and accept a few flaws, you will enjoy Royally Roma.  There was definitely some insta-love between Niccolo and Julia, though there were a few measly efforts to make the relationship take a while to develop.  It really did not seem realistic that the prince would not be recognized just because he shaved his beard.  And my biggest problem was with the whole reveal of the two characters’ deepest secrets to one another—Julia revealing her family problem and Niccolo revealing his status.  The scene, long awaited, was over so quickly that I was left scratching my head and rereading.  All that build-up for so little drama!

But really, I did not care all that much about the flaws.  I needed to read a lighthearted book, and Royally Roma delivered.  I would absolutely read other books in the series, and I enjoyed it quite a bit.

*I received a copy of this book in exchange for an honest review. Regina
Posted by Minding Spot at 2:24 PM