One of the things Parker Livingstone loves about his apartment at 822 Fifth Avenue is that it reminds him of the vanished mother who left it to him. The old building seems almost immune to the passage of time: its foyer, its furnishings, its etiquette are from another era. And once Parker discovers an out-of-service elevator with room to sit and write, he finds he can escape from the present completely. Not so at his job as a junior literary agent, where he faces a demanding boss and an intrusive coworker.He features them both as characters in his novel, the theme of which is his great preoccupation: time.Parker believes that time ultimately renders everything meaningless, and that the present is just an illusion. When Parker meets Sarah, however, he suddenly sees his future.She is all he has ever wanted in a woman: charming, beautiful, smart, confident, cultured.But she is elusive: a chance meeting in the Park, a picnic in the old elevator, and then she is gone again. As Parker's boss and coworker grow increasingly suspicious - demanding to see his manuscript Parker grows increasingly paranoid about losing his job and obsessed with his mystery woman. Who is she? Why are his neighbors silent on the matter? Where does she disappear to? And what might he have to forfeit to be with her? Upper East SideGirl is a moving portrait of a man in love and in crisis, as well as a thoughtful meditation on the nature of time itself." 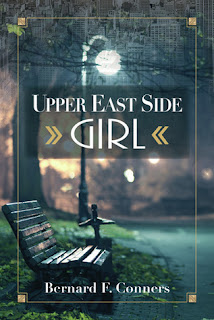 When I received this book, I was really surprised at how thin it was and I was a little skeptical whether the story would be very good or not. Once I started reading Upper East Side Girl however I found I was really into the story after the first 10 pages and I hated to put the book down when I had to. I love how Mr. Conners gave a lot of detail to the scenes and the characters. By describing the look of the apartment building I could see it in my mind as if I was there. The way Mr. Conners detailed the characters I felt like I knew them just as well as “Parker.”

I loved how suspenseful the story was and how fast the story seemed to move. Usually it takes me between 4 days-1 month to finish a book, I was able to finish this book in 3 days. Every time I thought I knew what was going on or what would happen next, I always found that my guess was off and I really enjoyed that. I love when a story can keep me guessing and interested throughout the entire book.

I have never read any of Bernard F. Conners books before, but I loved this book and think he did an amazing job with this novel. I plan to read his other books now and I hope they are just as great as this one was. I liked how short all the chapters were, I knew that if I had to put the book down that I could finish a chapter beforehand and not worry about being in the middle of one. I think that short chapters are great for those readers who love to read but have short attention spans.

I liked that the novel felt like a vintage type. To me it felt like I was reading a vintage story, but at the same time it could be set in today’s time as well. Out of a 10 I give Upper East Side Girl by Bernard F. Conners a 9 and Mr. Conners a 9 as well. I can’t wait to read more of his stuff!

*I received a copy of this book in exchange for an honest review. Tiffany
Posted by Minding Spot at 1:59 PM