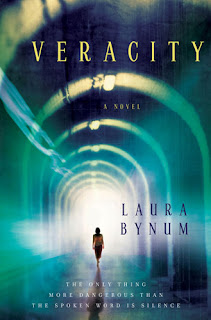 Veracity is set in the future, after the Pandemic has wiped out three fourths of mankind.  It's kind of scary thinking the bird flu and many others has killed so many.  Democracy as we know it is gone.  Instead, a new form of government is in place, one that has metal slates inbedded in everyone's neck.  The slate tells the government where you are and what you say.  If you say one of the red listed words, you are punished swiftly.  Either by current through your neck, or more often than not, death.

Harper Adams is a Sentient Monitor; she has some ESP capabilities that the government uses to their advantage. She works hard and swiftly rises within the system to a higher rank that most.   She monitors the punishments, making notes if the punishment justifies the crime.  But when her best friend is killed, Harper opens her eyes.

The Book of Noah is only referred to.  A book that the conferedacy swears to the public is just a legend.  It doesn't exist.  But there are rebels out there who swear it does and want to lead a rebellion against the confederacy.  Harper will have to break free of her slate in order to join them.  When one morning one of the new red listed words is Harper's daughter's name, she moves into action. But the journey to freedom will come at a cost.

Veracity is a phenomenal read set in the time of 2045.  It's chilling, scary, and an absolute page turner.  The suspense builds through-out until the novel leaving you breathless.  Harper is a fantastic character who learns and grows stronger as the story develops.  A great debut novel!

Take a few minutes and stop at a few other blogs on the tour: